The Executive Director of the Rivers State Sustainable Development Agency, RSSDA, Mr Noble Pepple, says the agency would spend N5.5billion on its scholarship scheme this year.

The RSSDA boss stated this yesterday at the weekly Roundtable organised by The Tide editorial board of the corporation.

Explaining the need for the increase in the budgetary allocation for scholarship, Mr Pepple said the need became imperative to accommodate the yearly increase in the  number of beneficiaries.

According to the executive director, the agency spent N4.4 billion last year for scholarship instead of N3.4 billion earlier earmarked for it.

“Scholarship takes the highest chunk of our budget as presently we have 1,100 students studying in  different parts of the world”.

The development, according to the RSSDA director, “is to achieve a solid manpower base for Rivers State, which is the vision of the Rivers State Governor, Rt Hon Chibuike Rotimi Amaechi”.

On the criteria for selection of the beneficiaries of the scholarship scheme, he said the process was transparent as all applications were considered”. He added that the screening process was treated on merit and quota consideration for all the 23 local government areas including the physically challenged.

The RSSDA director, who assured the people of Rivers State of quality service delivery, however, listed funding as one of the major challenges facing  the agency.

As a partnership scheme, he said, RSSDA counted on the support of all its collaborators to succeed.

Speaking on the complaints from some students studying abroad under the scholarship scheme, Mr Pepple admitted that such problems arose, but indicated that the shortcomings were addressed through the intervention of implementers and other control measures such as counseling”.

Specifically, he said the problems of accommodation and others encountered by students in India  had been resolved and the students now pursue their academic studies with ease”. 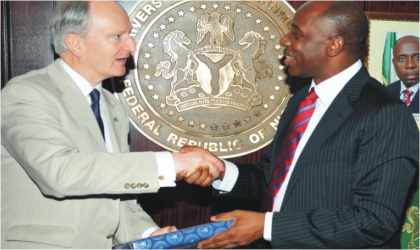 Governor Chibuike Rotimi Amaechi (right) handing over a souvenir to Mr Henry Bellingham, United Kingdom Minister for Africa, during a courtesy visit to the governor at Government House, Port Harcourt.