Over 110 civil servants in Rivers State have benefited from the car/housing revolving loans scheme introduced by the State Government to assist workers build their own houses and purchase vehicles of their own.           . Speaking while presenting the cheques to beneficiaries yesterday, the Head of Service, Mrs. Esther Anucha urged them to utilise the loans for the purpose they were meant and ensure they pay back so that others could benefit.

She noted that the delay in the disbursement of the loans was due to the negative attitude of past beneficiaries who regarded the loans as gifts and refused to pay back. To avoid a reoccurrence, she said stringent measures had been put in place to ensure that the loans were promptly recovered.

The Head of Service said over one hundred and twenty four million Naira was still being owed by past beneficiaries, noting that if all these monies were recovered, more civil servants would have benefited from the scheme. She said her office was considering publishing the names of defaulters so that civil servants would know those who were depriving them of getting the loans.

Mrs. Anucha explained that in view of the current inflationary trends, the loans granted were increased by one hundred percent, repayable within a six year period and attracts a minimal interest of five percent.

According to the Head of Service, beneficiaries cut across the 23 local government areas and all ministries and extra-ministerial departments, including teachers, nurses and other parastatals.

She commended the loans disbursement committee for doing a thorough job and congratulated the beneficiaries while urging those who had not benefited to exercise patience , adding that more workers would benefit as soon as enough funds were recovered.

In his speech, the Chairman of the Loans Disbursement Committee, Mr. Lambert Ekwueme, who is also the Permanent Secretary, Service Welfare in the office of the Head of Service, said over five thousand civil servants applied for the loan, out of which a minimum of two persons were chosen from each of the 23 local government areas.

He commended the Head of Service for gracing the occasion in spite of her bereavement, which was an indication that she had the welfare of workers at heart, and for approving that beneficiaries cut across all ministries and parastatals.

Responding on behalf of the beneficiaries, Mrs. Rehuoma Kejeh, a Director in the Ministry of Youths, thanked the Head of Service for placing priority on the welfare of workers, promising to utilise the loans for their purpose and comply with the repayment schedule.

A minute silence was held in honour of late Mabel Ibra Obowu, mother of the Head of Service, who died recently. 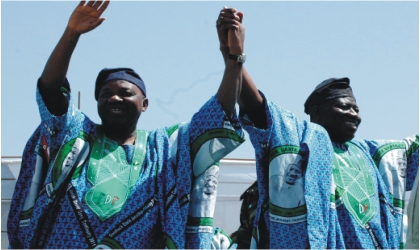