Arsene Wenger has warned that only Arsenal’s best will give them a chance of beating Barcelona today as two of the most attractive sides in European football resume their UEFA Champions League rivalry.

The English giants welcome the Spanish league leaders to North London determined to erase the memory of last season’s masterclass, when Barcelona crushed Wenger’s side 6-3 on aggregate over two legs. Although Barcelona are overwhelming favourites to progress to the quarter-finals, Wenger believes his side had absorbed the lessons handed out in that defeat and are a stronger unit ten months on.

“When you play a team like Barcelona, you need all 11 to be at their best,” Wenger said. “For us it is important we play with belief. What we have learned from last season is, in the first half, we gave them too much respect, we were lucky to get away with that (in the home leg).

“We are not favourites in this game but I think we can do it. We know from last season’s games that what is most important is to play at our level. Barcelona are maybe better this season than last season but so are we. That will make the game even more interesting.”

Last season, Arsenal were run ragged in a scintillating first half display at the first leg, eventually fighting back from 2-0 down to snatch a 2-2 draw. The return leg at the Nou Camp saw Wenger’s men swept aside after a virtuoso display from Lionel Messi, scorer of all Barcelona’s goals in a 4-1 win.

Wenger, however, believes that the presence of Robin Van Persie who missed the match last year – and Cesc Fabregas, who missed the second leg, means his team will be a different proposition for Wednesday’s last 16 clash. Van Persie scored both goals in Arsenal’s win over Wolves in the Premier League on Saturday, and the Dutch striker’s form is a source of optimism for Wenger as his side prepares for their biggest game of the year.

“It took (Van Persie) some time to come back into form (this season), but now he is at his best,” said Wenger. “We go into the game in better shape than last year, and Robin is part of that. Then the team had less confidence. We have matured better, we can certainly compete technically better with them. We will try to play to our strengths. We will try to attack.”

Arsenal’s teenage midfield prodigy Jack Wilshere, another player who was not involved in last season’s tie, hinted that the Gunners will aggressively seek to disrupt Barcelona’s metronomic passing game. “We’ve got to change our game a bit,” said Wilshere. “We need to get in their faces and win the ball back, if you like, be a bit nasty with them. We have to press them as a team.”

Arsenal could also be bolstered by the dramatic return of Samir Nasri. The French playmaker, initially thought to be out of contention for the game after injuring a hamstring last month, is available according to Wenger. “I would not rule it out but I will not take a crazy gamble,” Wenger said. “Physically he is ready, but is there the risk of a setback.”

Barcelona meanwhile are likely to be without central defender Carlos Puyol as they aim to bounce back from the disappointment of seeing their record-breaking run of 16 straight victories in La Liga come to an end in a 1-1 draw with Sporting Gijon at the weekend. Barca winger Pedro Rodriguez agreed with Wenger that Arsenal were a stronger side from the one beaten last season. 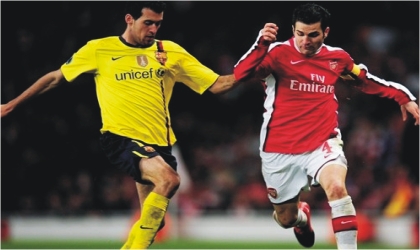 Arsenal’s Cesc Fabregas (right) and Sergio Busquets of Barcelona. Both are expected to clash in midfield today