The people of the South-South would roll out their political drums to welcome their son, President Goodluck Jonathan as the Peoples Democratic Party (PDP) moves its presidential campaign train to the zone in the oil city of Port Harcourt tomorrow.

As at yesterday, the Liberation Stadium, at Elekahia, the venue of the event was wearing a new look with  huge presence of security personnel combing the area ahead of the arrival of Dr Jonathan, his vice, Namadi Sambo, PDP governors and other PDP bigwigs that would grace the occasion.

Chairman of the Publicity Committee, South-South zone of the party, Barrister Imo-Owo Okpokpo said President Jonathan, who is also the presidential candidate would be on hand to deliver his manifesto to the people of South-South.

Barrister Okpokpo said the Saturday rally would also witness the handover of flags to governorship candidates, Senate and House of Representatives candidates of the party from the zone.

At the rally, Governor Chibuike Amaechi of Rivers State, Timipre Sylva of Bayelsa State, Godswill Akpabio of Akwa-Ibom State would also be on hand to deliver speeches as well as Governor Liyel Imoke of Cross River State and his Delta State counterpart, Dr Emmanuel Uduaghan.

But one important aspect of the rally, he said was that it would be used to consolidate the party’s stronghold in the zone, adding that the six states of the zone would ever remain PDP enclaves. But the Action Congress of Nigeria is controlling Edo State. The PDP zonal Publicity Secretary, however, noted that the President would use the opportunity to renew his electoral promises to the people and solicit for their votes.

In a similar vein, the National Vice Chairman of PDP in the South-South, Chief Edet Okon Nkon Nkpubere assured that the party would witness unprecedented crowd, hinting that the Senate President, David Mark and Speaker of the House of Representatives, Hon Dimeji Bankole would equally grace the occasion.

Meanwhile, the wife of the Rivers State Governor, Dame Judith Amaechi has said that about 5,000 PDP women would be mobilised from the local government areas for the rally.

Dame Amaechi while calling on the womenfolk to participate in their numbers, noted that the rally should be seen as a formal endorsement of their son and in-law for the presidential elections. 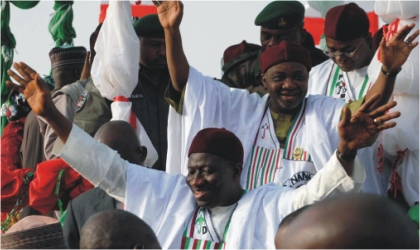 NEMA Alert On Flooding In 2011 …Urges Nigerians To Brace Up