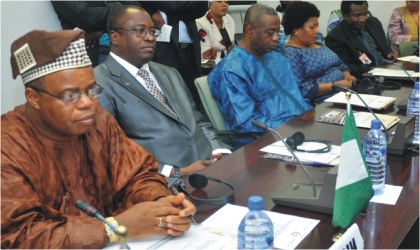 Cross section of representatives of beneficiary ECOWAS States at the exchange of a Joint Border Post Works contracts funding agreement between ECOWAS commission and European Union in Abuja, last Friday

The products were impounded during the CPC’s first zonal enforcement against fake products in Port Harcourt, the Rivers State capital.

The CPC enforcement team led by its acting zonal coordinator, Dr Ebenezer O. Emeribe, acting on a tip-off, stormed Okija Street, popular avenue for cable and electrical appliances where they seized over 100 fake cables from the dealers.

Dr Emeribe told journalists shortly after the exercise that the protection council was empowered by law to sanitise the Nigerian markets of fake products to ensure the consumption of quality products by consumers.

The CPC zonal boss explained that the raid became necessary following complaints by the Cable Manufacturers Association of Nigeria (CAMAN) over the high level of fake cables and wiring products at the Okija market, adding that it embarked on the exercise to mop up the market and make room for only quality cables to be sold in the market.

Dr Emeribe who expressed regrets that owners of the shops with the fake products went underground before the team arrived, however, promised that the zonal CPC would continue its efforts to ensure total sanity in the Port Harcourt cable/wiring products market.

“Information went round and a lot of them escaped but that will not stop us. We must continue  in our quest in restoring sanity to the cable market”, he said.

S’South CPC revealed that the exercise would be extended to other products, adding that other states in the zone would also be visited for the same exercise.

He further assured those behind the fake products would be made to face the full wrath of the law.

Earlier, the representative of the Cable Manufacturers’ Association of Nigeria, Mr Gerald Duruemeruo had lamented the spate of counterfeit products especially substandard cable products in the country.

Duruemeruo noted that the case of fake products had been a source of concern for CAMAN for a long time no and lauded the CPC for its quick response to the alert.

“For a very long time, we have been  experiencing this and have been crying to the government to intervene. They thanked CPC for supporting us and we need some laws to enable them do this more effectively. Counterfeit is too much in Nigeria. We know times are hard, but we need to improve on our image and status, he said.

He said the issue of fake cables had adversely affected the cable business as well as endangered the lives of people and properties arising from its explosive nature.

Durumeneruo, therefore, called on the Federal Government to empower the CPC, Standard Organization of Nigeria (SON) and other related bodies towards restoring the lost image of the country in area of  counterfeiting.