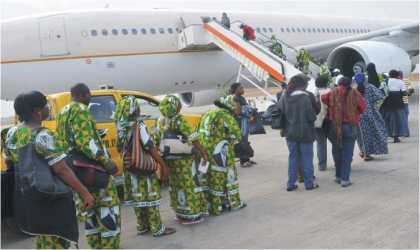 A serious crisis is brewing in the five month old administration committee of the Mile One Market Traders Association (MOMTA) over alleged embezzlement of funds and diversion of 60 bags of rice that came as part of a gift to the association.

The Tide reliably gathered that 100 bags of rice were given to MOMTA as Christmas gift last December by Nigeria’s First Lady Dame Patience Jonathan, but that the committee chairman, Chief B.A.Georgewill allegedly declared only 30 bags.

Speaking with The Tide when  our correspondent called on him recently, the Secretary-General of the administrative committee, Chief Godwin  Eleji, said that Dame Jonathan gave each of the three major markets in Port Harcourt, viz; the Mile Three, Mile One and New Layout Market 100 bags of rice during the Christmas and New Year season, but that while the other markets shared their gifts adequately, the Mile One market chairman declared only 30 bags, that after much pressure, he brought another 10 bags to make it 40 bags, which the traders rejected.

In his own reaction, the 2nd Vice Chairman of the association, Chief S Emenike stated that the chairman had decided to take over the positions of the treasurer, financial secretary and publicity secretary as he does every thing by himself without recourse to the other exco members.

Emenike also said that the chairman does not want honest people to work with him, pointing out that what they spend in paying for the security of the entire market is less than N500,000 per month, whereas members contribute a total of N1.5million from N300 monthly dues.

They, therefore, called on the Rivers State Government to step into the situation to forestall a breakdown of law and  order.

When contacted for his reaction on the issue, the Chairman, Chief B.A Georgewill, said he would not comment on the issue until our reporter disclosed the sources of his information.

It would be recalled that after a long claim between two parallel excos, a High Court in Port Harcourt restored power to the Chief Georgewill-led administrative committee, which is not an executive committee to pilot the affairs of MONTA last August, but no date or time was given to them to conduct an election for a new executive council.