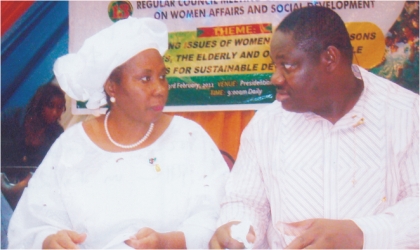 The Rivers State Government spent about N70billion on education alone in the state last year and the expenditure is expected to get higher this year, Governor Chibuike Amaechi said.

Aside the 350 primary schools it was building, he said government was also providing free textbooks, feeding, uniforms for its children in the primary schools.

So far, he said about 200 of the model primary schools were now completed and have been equipped with world class facilities in order to provide the best for the citizenry.

Governor Amaechi informed the UBE commission that apart from improving on the educational infrastructure, his administration at inception took over the payment of teachers, a responsibility which he noted was handled by the local councils.

The governor noted that the huge strides made by the administration paved the way for the state to access UBEC funds which  was hitherto not accessed and thanked UBEC Secretary, Dr Moddibo Mohammed for his assistance.

He stated that RSG had paid its counterpart funding of over N600 million and was currently building 23 model primary schools with the support of the fund.

Meanwhile, the state UBE has decried the poor Information and Technology and skilled teachers in the state, saying that government has begun recruiting and training  qualified manpower in that area.

Permanent board member of UBEC, Hon Lucky Ugochukwu Worlu told reporters at the opening of the meeting yesterday that the state had sufficient teachers and there was no need to engage more.

Currently, he disclosed that the commission had about 23,000 teachers, adding, ‘ we have excess teachers for Rivers State. What we don’t have are teachers for special skills… this is for ICT and others but we are developing them now”.

He disclosed that UBEC had merged some schools for administrative purposes, and to check the ghost workers syndrome, saying the move had given birth to effective administration and management of primary schools.

On human resource development, he said a lot of reforms were carried out to make the system effective through transfer and posting of teachers, noting that those that have education Degree were posted to schools. According to him, those in the education board were posted to schools and that the transfers and postings were not politically motivated.