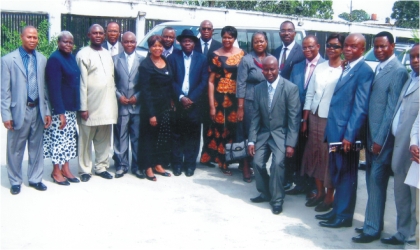 Rivers State Head of Service, Mrs Esther Anucha (middle) with Permanent Secretaries, during a condolence visit over the death of her mother in Port Harcourt, yesterday.

The Executive Director, Women Foundation of Nigeria (WFN), Dr Agodi Alagbe, says, Rivers State is topping the chart of states that fulfilled 35 per cent women affirmative action in the country.

Dr Alagbe stated this Wednesday in an interview with newsmen shortly after the 13th regular meeting of the National Council of Women Affairs and Social Development in Port Harcourt.

In her words, “from available records and confirmed during the inspection of some projects in the state, the Rivers State Government is already ahead of other states in the country in terms of developmental projects and appointment of women into key positions of trusts.

She advised other state governors to emulate the example of Governor Amaechi in the appointment of women into key positions, saying, the move would go a long way in actualising the goal of gender equality.

Dr Alagbe said her foundation was committed to partnership with the Federal Ministry of Women Affairs and Social Development  towards improving and sustaining the role of women in national development.

The WFN executive director, however, urged various ministries of Women Affairs across the 36 states of the federation to support the Federal Ministry of Women Affairs and Social Development in the task of achieving women’s gender affirmative action in the country.

Earlier, the Deputy Governor of Rivers State, Engr Tele Ikuru who listed the efforts of the state government in the appointment of women in some key positions, commended the women for their unprecedented achievement in term of developmental projects in the state.

He reiterated the state government’s commitment in  protecting the rights of women in the state.