The State Security Service in Rivers State has warned against renewed militancy in the state, saying that there would not be  an amnesty for anybody who carries any fire arms both in creeks and city.

The Rivers SSS Director, Mr Douglas Doogo handed down the  warning when his men yesterday, arrested some youths over the allegation of forming new militant group within the creeks of Kula in Akuku-Toru Local Government Area

The SSS boss noted that the group had already embarked on recruiting of fresh foot soldiers to actualise their devilish acts.

“As far as we are concerned, there is no amnesty for anybody who carriers arms against any human being, “ Doogo declared, adding that any person seen with arms automatically contravenes the laws.

In a similar development, the state SSS has also paraded three suspects over an allegation of embarking on false recruitment on the internet of Shell Petroleum Development Company (SPDC).

According to the state director of SSS, the victims include some newly passed-out National Youth Service  Corps (NYSC) members that paid over N150,000 each to non-existing jobs.

He stated that one Valera Umukoro who impersonated as a member of SSS was arrested and she is being interrogated. 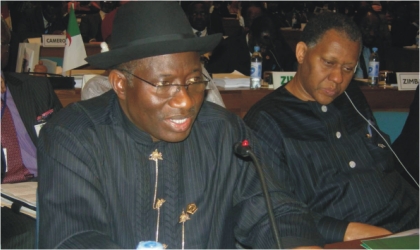 President Goodluck Jonathan (left) delivering his speech at the 16th African Union (AU) Summit in Addis Abba, on Sunday. With him is the Foreign Affairs Minister, Mr Odein Ajumogobia