Following the restoration of peace in Rivers State, more companies and corporate organisations have renewed their interest in investing in the oil rich city.

The latest group is Total E&P, which had indicated interest in the building of the Greater Port Harcourt City, a major signature project of the Amaechi administration.

Speaking on the preparedness of the multinational oil firm to partner in the project, the Managing Director and Chief Executive of Total E&P, Mr. Guy Maurice said the management of the company was enthusiastic about the project and was willing to commit itself to its development.

Mr. Maurice thanked the Rivers State Governor, Rt. Hon. Chibuike Rotimi Amaechi for providing an enabling environment for the company’s operations in the state, assuring that their interest in the development of the new city would be in tandem with the development aspirations of the state government.

Responding, the State Governor, Rt. Hon. Chibuike Amaechi said the state government was willing to partner with Total in the development of the state, and the new city in particular, expressing his delight to have the  organisation on board.

According to him, it would be interesting for Total and the State Government to work together to create employment for the youths of the state, emphasising that some other investors were expected to commence physical development of projects in the new city before the end of this first quarter.

“We are replicating the popular Monte Carlo Shopping centre found in Johannesburg, South Africa here and three investors have agreed to commence that project by March”, he said.

The governor commended Total E&P for their interest in the development of the state, assuring that the state government was ever committed to its primary responsibility of creating an enabling environment for investments to thrive.

In another development, Governor Amaechi, has described late Mr. Tamunotonye Wilcox, as a true Rivers man who had the patriotic zeal to contribute to the development of the state.

Governor Amaechi said last Thursday during a service of songs in honour of late Tamunotonye Wilcox, who died in a power auto bike crash on his way to Port Harcourt from Lagos.

The Governor who said he received the news of late Wilcox’s death as a rude shock, extolled the good qualities of the patriotic Rivers man, who had offered useful suggestions that would assist the government in its drive to develop the state.

Governor Amaechi urged the bereaved family to take solace in the fact that their beloved son lived a worthy life within the short period he lived on earth, . He said that he would be remembered by many, and prayed God to grant the soul of the deceased eternal rest.

Also speaking, Mr. Kelvin Alanso, said late Tonye Wilcox made his impact felt in Port Harcourt and Lagos where he lived till his untimely death, describing him as a philanthropist, a good Christian and a good family man.

Also speaking, the younger brother to the deceased, Mr. Sowarifagha Wilcox, thanked Governor Chibuike Amaechi, friends and well wishers of his brother for honouring him with their presence, and appealed to all to continue to stand by the family he left behind.

The service of songs featured several tributes from friends, colleagues and relations as well as candle light procession. 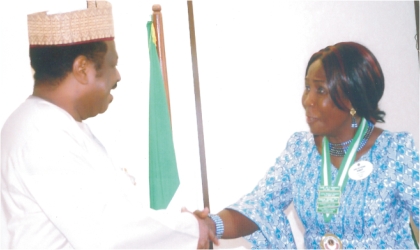 Hon Minister of State for Health, Alhaji Suleman Bello in a handshake with the District Governor, Lions Clubs International District 404A (Nigeria) Lion Dame Joy Peterba Warmate, when she paid a courtesy visit, in Abuja, recently.