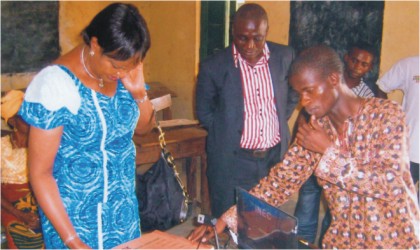 Stakeholders from the education sector in Rivers State have called on the state government to reverse its decision to cancel National Examination Council exams in public schools.

Baring their minds in an opinion poll conducted by The Tide recently in Port Harcourt, the stakeholders agreed that the decision would adversely affect the children of the less-privileged in the society .

Chairman of the Nigeria Union of Teachers (NUT), Chief Moses Adiela stressed the need for a rethink if ever the state government had thought of such plans.

In his words, “ the position of the NUT, however, is that since only relatively few Nigerians are opportuned to study abroad, scrapping NECO will only put the common man’s children at a disadvantage”.

Chief Adiela argued that with the existence of the National Examinations Council, many alternatives were opening to a number of students in their aspirations to study further.

“NUT is of the view that the two examinations bodies now existing should be open to students. The students should be allowed to make their choice. Any attempt to impose one on them is undemocratic”, he added.

He reasoned that stopping public schools from writing NECO was an indirect way of encouraging parents to take their wards to private schools where they would write the NECO exams as well.

A lecturer in the Department of Fisheries, Rivers State University of Science and Technology, Dr Awoteinm George described the state government’s decision to cancel NECO as unheard of. According to him, Nigeria as an entity was a sovereign state that has made a policy on education, so, nobody has the right to stop it.

Dr George argued that though government might have initiated the decision based on failure of some foreign schools in recognising the certificates, most of the foreign schools were nor better than the local ones.

Instead of enforcing such plans, the university don suggested that the state government should improve on the standard of education by building the professional capacity of teachers.

Similarly, Rev Sylanus Eme, a teacher at the Enugu University of Science and Technology (ESUTECH) believed that NECO had to improve its standard by ensuring strict supervision and monitoring of its exams.

“The only problem the government would tackle, “ he noted, was to ensure that NECO certificates were recognised in foreign universities”.

In the view of the Principal of SAMPAK Secondary School, Choba, Mr Echebir Christian, the state government should seek to  improve the standard of NECO certificates by aligning the exams body with other higher exams bodies.

A parent, Mr Amadi Christian berated the authorities for making such pronouncement, saying, the move would deny a lot of children the chances of securing admissions in higher institutions.

Since the establishment of the examination body by the Olusegun Obasanjo administration in 2000, Mr Amadi noted that a lot of pupils had scaled through the hurdle of waiting for long years at home for WAEC results.

However, the Public Relations Officer of the Rivers State Universal Basic Education (UBE), Deacon Franklin Dimeari endorsed the government’s decision on NECO, saying, it would save the state government the challenges of obtaining overseas scholarships for its students.

“If NECO certificates are not recognised by foreign universities, why should I encourage my child to write NECO”, he asked.

It would be recalled that Governor Chibuike Rotimi Amaechi last year hinted of government’s plans to scrap NECO exams in public schools during a retreat held in Calabar. He explained that the decision was to reduce the difficulties in obtaining foreign admissions for indigenes.