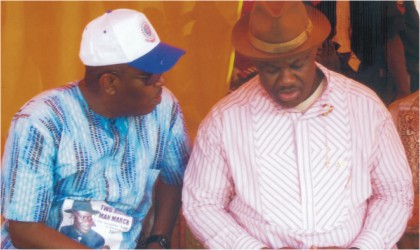 The Rivers State House of Assembly may pass the state 2011 Appropriation Bill tomorrow as it takes a critical vote on the bill sent to it by the state Governor, Rt Hon Chibuike Rotimi Amaechi for consideration .

The Speaker of the State Assembly, Rt Hon Tonye Harry gave this indication yesterday during the House plenary session, adding that the House had received 28 reports from various House committees.

He thanked the lawmakers for their commitment in ensuring that the budget was passed on time.

Governor Amaechi had on December 16, last year presented a budget proposal of N414billion for 2011 fiscal year tagged, “ Budget of Transformation” to the state House of Assembly for consideration. Out of the 2011 budget estimates, N267.841bnilion is for capital expenditure while N146.259bn is for recurrent expenditure.

However, some of the lawmakers who submitted their reports observed that there was wide range of complaints on the non- release of funds to the various ministries and agencies last fiscal year.

The lawmakers called on Governor Amaechi to ensure that budgetary allocations appropriated for various ministries and agencies were released to them to enable them perform more effectively.

Meanwhile, the State Assembly has called for the establishment of an Industrial Court in the state.

The Speaker, the state House of Assembly, Rt Hon Tonye Harry made the call, Monday during the plenary session to consider a vote on the amendment of some parts of the constitution for the setting up of the National Industrial Court.

Hon Harry said the establishment of the court in the state was imperative considering the highly industrial  nature of the state.

When put to vote, 14 lawmakers voted in favour of the motion, while one declined.

Harry explained that the  outcome of the vote demonstrated an agreement with the National Assembly on the need to establish an industrial court.

Earlier in his presentation, the Leader of the House, Hon Chidi Lloyd said the court if established, would help to tackle the increasing rate of strike by the various labour unions in the country.

Hon  Lloyd also said that the court would serve as an arbiter between the government and labour unions as well as tackle the incessant  strike from state –owned universities.

Dolphins FC Cracks Down On Indiscipline