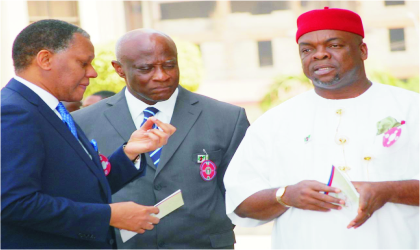 The recently concluded governorship primaries of the Action Congress of Nigeria (ACN) in Rivers State appeared to have torn the party apart as two of the defeated aspirants have vowed to fight on.

A spokesman of Tekena Abel-Tariah campaign organisation, Richard Jumbo who gave the indication that all was not well in Rivers ACN, accused the leadership of the party of imposing what he called unpopular candidate on the party as a governorship candidate in the state.

Jumbo described the ACN primaries in Rivers State as the worst so far and vowed that Abel-Tariah campaign organisation would seek redress in court until the issue was redressed.

He was confident that if the situation was not ratified, ACN was likely to lose in the state in the April election.

According to him, a situation whereby an unpopular candidate was imposed against the wishes of the people was a roadmap to disaster for the ACN in Rivers State.”

Perhaps not satisfied with the conduct of the ACN primaries, former leader of the defunct Niger Delta Volunteers Force, (NDVF), Alhaji Mujahid Asari Dokubo has reportedly resigned from the party.

No reason was given for Dokubo’s resignation from the party but political analysts believe that the action shows that the crisis in the party has further degenerated and likely to affect the party’s political fortune in the state.

Roberts in a chat in Port Harcourt, said his emergence as a consensus candidate had the backing of the Ralph Okey Nwosu-Ied national executive committee of the party.

He commended the leadership of the party for the gesture and promised to run a purposeful and people-oriented government if elected into office as governor in April 2011.

The party’s flagbearer disclosed that at the primaries of the party, Mr. Alaso Harry emerged the senatorial candidate for Rivers West senatorial district while four House of Representatives candidates emerged on the platform of the ADC.