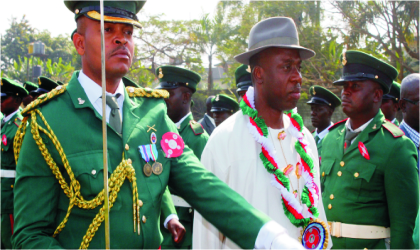 The Independent National Electoral Commission (INEC), says it would not extend date for the voters registration exercise beyond the two weeks allotted to it.

The INEC Director, Voters and Civic Education, Alhaji Ibrahim Biu dropped the hint in an interview with The Tide at the end of a zonal interactive forum with religious leaders in Port Harcourt last Thursday.

Biu said apart from the time constraint, the commission was also handicapped by the enabling laws.

But he said that the commission had already put in place adequate modalities towards the success of the exercise, pointing out that a total of 120,000 Direct Data Capture (DDC) machines had been acquired for the exercise.

He said the interactive session nationwide was designed to explain to the religious leaders, the state of preparedness for the voters registration exercise and the April general election.

The INEC director stressed the need for all Nigerians to be part and parcel of the on-going electoral process in the country.

The INEC director who represented the commission’s Chairman, Prof Attahiru Jega at the forum solicited the cooperation of religious leaders in ensuring the success of the exercise.

Earlier, in his welcome address, the Rivers State Resident Electoral Commissioner, Hon. Aniedi Ikoiwak had said that the attendance of the religious leaders at the meeting was a demonstration of their patriotism to the course of nation building.

Chairman of the Independent Electoral Commission (INEC), Prof. Attahiru Jega, says the challenges faced by the commission on the first day of the voters registration exercise will be surmounted within the next few days.

He called for understanding by Nigerians while speaking to journalists at Toke, in Bayelsa State soon after the registration of President Goodluck Jonathan, his wife, Dame Patience and family, during his monitoring of the exercise in some parts of the state. Jega said he had identified some of the problems. According to him, such problems include late arrival of materials and ineffective capturing of fingerprints, saying that these were not unusual, being the first day of the exercise.

He said technical partners had been advised to rectify the problems, recalling that out of the 120,000 machines to be used, 98,000 had already been deployed to various registration centres across the country, while the remaining ones would be deployed as soon as they were received.

He pleaded with Nigerians to exercise patience, assuring that “every eligible and willing voters will be registered before the end of the exercise.”

While admitting that it might be difficult to record 100 per cent hitch-free exercise, the INEC boss said the commission would try its best not to disappoint the country.

He, however, expressed satisfaction on the peaceful take-off of the exercise and response of the people to get registered.

The Tide correspondent in Bayelsa State reports that most registration centres in and around Yenagoa recorded low turn-out with most people complaining that the exercise was too slow.