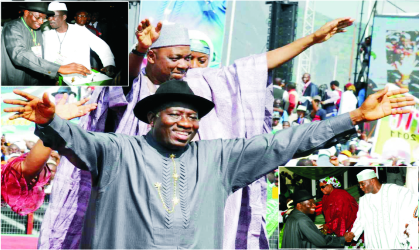 Nigeria’s President Goodluck Jonathan and Vice President Namadi Sambo waving to their supporters; Insert (Above), President Jonathan casting his vote during the presidential primaries, Insert (below) Jonathan in a handshake with a presidential aspirant, Alhaji Atiku Abubakar, at the Eagles Square, venue of the Peoples Democratic Party (PDP) primaries held in Abuja, yesterday.

President Jonathan defeated his closest rival and former vice president, Alhaji Atiku Abubakar, with 2629 from 36 states and the federal Capital Territory, while Atiku had 686 votes and another aspirant Mrs Sarah Jubril had just two votes.

He however lost to Atiku in Sokoto, Zamfara, Kano, Kebbi and Niger states. Very surprisingly, Atiku lost in his home state, Adamawa, scoring just 31 votes from a total of 110 votes cast while President Jonathan clinched the rest 76 votes.

Meanwhile, the PDP convention which lasted from Thursday till dawn on Friday witnessed a hitch-free primary election amidst tight security at the Eagle Square, Abuja.

(See chart for detail of how the delegates voted state by state.)