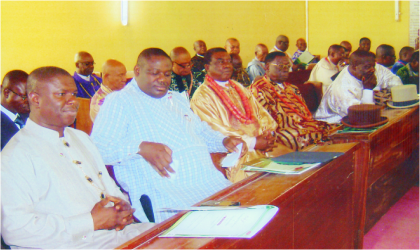 Emerging from the exercise, Jonathan said it was “rigorous but eventful”. He is drilled by the 11-man screening committee chaired by Alhaji Aminu Wali.

The screening exercise is a condition which precedes the party’s presidential primaries tomorrow.

Reacting to the Abuja High Court ruling on Monday which gave him authority to participate in the screening exercise, the President said it was a welcome development.

“Except there are cases of criminal records that you are hiding, these are issues that could be raised.

“Otherwise, it is Nigerians that will elect their leaders whether it is a councillor or President,” he said.

The President also noted that the PDP primaries generally across the country had been successful notwithstanding the reports of pockets of crisis.

Party officials, however, declined to comment on the reasons for the delay.

Last Monday, Justice Isaq Bello of the FCT High Court dismissed the suit which sought to eliminate President Goodluck Jonathan from contesting the 2011 presidential poll on the platform of the PDP.

In the suit against Jonathan, Mr Yahaya Kwande, Chief Dubem Onyia and Alhaji Lawal Kaita had instituted the action challenging the PDP, the President, the National Chairman of the party as well as INEC on the matter.

The plaintiffs further sought a declaration compelling the defendants to comply with Sections 13 and 15 (a) and (f) of the Third Schedule of the 1999 Constitution.

Bello said that the provisions of Article 7 (2) (c) of the party’s constitution supported zoning and rotation of the presidency between the South and the North.

The Judge explained that it was premature for the court to decide on the matter at this stage, saying that the suit had not fulfilled the terms as provided by Section 87 of the Electoral Law of 2010.

“That Section of the Electoral Law said that before an aggrieved member of the party could approach the court on issue of nomination, the party primary must have been done.

“Such a member or members must have contested in the primary; so it is clear therefore that this suit is premature and it is hereby dismissed” Bello said.

Speaking with newsmen after the proceeding, Mr Alex Iziyon (SAN), counsel to Jonathan, expressed delight on the decision of the court, saying that the plaintiffs were interlopers.

Mr Joe Gazama (SAN), counsel to the PDP, said that the pronouncement of the court was apt, stressing that the action was an outright abuse of court process.

Bello dismissed the suit while ruling on the preliminary objections filed by Rickey Tarfa, counsel to the former Vice President.

NPL, Referees Get Thumbs Up