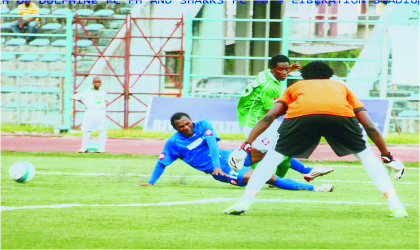 Good officiating, excellent pitches and impressive turnout are essential ingredients now improving the commercial potential of the Nigerian Premier League, according to Rangers International FC of Enugu’s Technical Adviser, Alphonsus Dike. He observed in Kano, that the league was improving due to renewed efforts.

“The league organisers have done well this season in ensuring that the competition stays afloat by insisting on those three components,” he said.

Dike praised the organisers, the Nigeria Premier League (NPL), for ensuring the provision of excellent pitches as well as the referees, for their performances so far.

“I think it has been good so far, and I must commend the NPL and the referees too, for what we have been having so far,” the coach said.

Dike, whose team lost 0-1 to Kano Pillars FC at the Sani Abacha Stadium in Kano at the weekend in a week 10 match, cited the game as a significant match that exemplified the growth of the league competition.

“It was an impressive match, and it was just unfortunate that we lost the game. Both sides played well, the pitch and the atmosphere were alright, while the referee also did well,” he said.

The game was won with a Gambo Mohammed penalty kick in the 31st minute after a handball infringement, with both sides missing good scoring chances after many impressive build-ups.

“I am really impressed with this match, and it gives us hopes of a developed and improved league.

“The match was on a remarkable pitch, and the turnout of the crowd was impressive; if all our league matches will be like this, we will have much more sponsorship for the competition,” he said.

Dike praised the performance of referee Sani Abiodun of Osun, saying he was looking forward to having such performance from other referees in the competition.

“It was a good performance and our loss was just through a mistake; I believe if we continue to have such performances, the league will be better for it,” he said.

The coach said that his team was going to re-strategise to make amends for the loss by winning their next game at away.