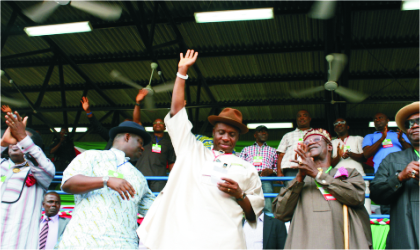 Governor Chibuike Rotimi Amaechi has emerged as the flagbearer of the Peoples Democratic Party (PDP) for the April 2011 governorship election in Rivers state.

Amaechi, polled 1,139 votes out of 1,143 votes cast, to beat three other aspirants, at the PDP primaries which took place at the Sharks Football Stadium, in Port Harcourt, yesterday.

Mrs. Dennisada Ben-Fiabema scored one vote to come a distant second, while former Governor Celestine Omehia and Dr. Moore Oja Chinda did not score any vote as three votes were declared void.

Declaring Governor Amaechi as the duly elected candidate, the Chairman of the four-member PDP Electoral Committee, Chief Dan Osi Orbih said Governor Amaechi had satisfied the requirements to be declared elected as the party candidate.

Responding shortly after being declared winner, Governor Amaechi thanked the PDP delegates for the confidence reposed in him by giving him the ticket to fly the party’s flag at the April polls.

Amaechi, however said the victory did not call for celebration, but for reconciliation of all aggrieved party members to ensure that the success of the party at the April general elections was guarranteed.

The governor, who also described the victory as victory for alt called on the PDP candidates that succeeded at the various primaries to go and reconcile with those that lost to them in the overall interest of the party.

He urged them to start now to mobilise the people to register for the forth coming registration of voters exercise, assessing that he would not disappoint the people, but to run an all inclusive government.

The governor explained that campaigns for the April election would be at senatorial districts and local government levels, pointing out that the voters must not be taken for granted as all votes must count.

He promised to conclude all projects and programmes started by his administration, adding that the emphasis would be on human capital development to empower Rivers people for better future. He also said that the scholarship scheme would not be jettisoned under his second tenure.

Governor Amaechi, who announced this Saturday while soliciting for votes from delegates in the area said all Andoni delegates should reciprocate the gesture by giving him their total mandate at the primaries as well as mobilise their people to vote for PDP at the general elections in April. Engr. Ikuru is to run with him as deputy for the second tenure.

He explained that his administration had brought physical changes in the area, stating that he had spent N16 billion on the Ogoni-Andoni-Opobo/Nkoro Unity Road project, built modern primary schools, health centres and initiated the construction of a modern secondary school in the area.

He noted that the ongoing Unity Road project would be completed by the end of next year, reminding the people of the huge dividends of democracy his administration had given them since its inception.

Speaking at the occasion, the State Deputy Governor, Engr. Tele Ikuru thanked the Governor for choosing to run with him for the second term and for the numerous projects done in Andoni. He said in spite of the various projects, the Governor had also deemed it necessary to favour the area with several appointments, assuring that his people would support his re-election bid.

Earlier, the Chief of Staff, Government House, who is also the Director-General of the Amaechi Re-Election Campaign Organisation, called on Andoni people to vote Governor Amaechi both at the party primaries and general elections, considering his efforts in bringing visible changes in the state’s infrastructural base.

Meanwhile, Governor Amaechi also met with delegates from Opobo/Nkoro Local Government Area, where he was unanimously adopted as their sole candidate both for the primaries and the general elections in April.

The motion for the adoption was moved by Mr Dandeson Kpukpo and seconded by Hon. Andrew Anderson Miller.

NPL, Referees Get Thumbs Up