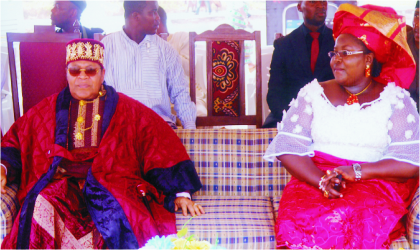 Rivers State Commissioner for Information and Communications, Mrs Ibim Semenitari, who represented Governor Chibuike Amaechi, with the Amanyanabo of Opobo Kingdom, King Dandeson Jaja JP, during the opening ceremony of the 2011 Festival of Opobo International Boat Regatta at Opobo, recently.

Three principal officers of the Rivers State House of Assembly were among the 21 serving lawmakers who lost their bid to return to the hallowed chambers of the state legislature after the Peoples Democratic Party (PDP) primaries.

Although, there is no official statement from the PDP state secretariat preliminary results as announced in the various constituencies across the state show that 21 out of 32 serving lawmakers who contested in the primaries lost in the contest while 11 emerged victorious.

Two female lawmakers, Hon. Tamuno Maureen (Ogu/Bolo) and Linda Stewart (Okrika) could not make it during the primaries.

However, 11 lawmakers picked the tickets of the party for their respective constituencies in the forthcoming general elections in the state House of Assembly.

Commenting on his post election victory, the chairman, House Committee on Information and Training, Hon Onari Brown thanked God for the victory and assured the people of his constituency of a better representation.

He thanked his supporters and all the delegates for their support and confidence reposed on him and urged them to remain peaceful and participate in the forthcoming voters registration exercise.

In House of Representatives primaries, 8 members of the House in Rivers state lost their bids to go back. They include Ike Chinwo (Obio/Akpor), Chinyere Igwe (Port Harcourt II) and Igo Aguma (PHALGA I.).

While in the senatorial primaries, Senator Lee Maeba was the only casualty while Senator Wilson Ake and George Sekibo were returned in their various senatorial districts.