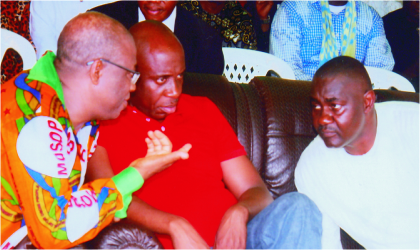 The Delta State governorship re-run election was held yesterday across the state amid heavy security, even as the Independent National Electoral Commission (INEC) boss, Prof. Attahiru Jega joined in monitoring the election processes in some parts of the state.

The election rated to have been predominantly peaceful in most parts of Delta North and Delta South Senatorial Districts was fairly volatile in the Delta Central area of the state.

Some eligible voters complained that despite the fact that they had their voter’s cards, their names were missing from the list displayed by INEC officials at the various polling units. Some INEC officials interviewed expressed shock that the re-run polls witnessed a considerable low turn-out, while movement of persons and vehicles were restricted throughout the state.

The deputy governorship candidate of the Republican Party of Nigeria (RPN), Mrs Caroline Enuha was unable to vote at Ogwashi-Uku (Ward 03) as her name was not found in any of the displayed voters’ list in the area, even as she presented her voter’s card to the INEC officials.

The INEC officials, mostly ad-hoc NYSC members explained that some electorate whose names were on the voters’ list could not tender their temporary or permanent voters’ cards, and therefore could not be allowed to vote.

Meanwhile, while Deltans jostle for the election, four persons including a cleric lost their lives in a ghastly motor accident.

The accident occurred on the Asaba-Benin Expressway, at Ubulu-Okiti, in Aniocha North local government area of Delta State when a Peugeot 406 saloon car with registration number AM 788 AGB collided with a trailer parked on the road side.

Eye witness account revealed that the driver of the car, who died on the spot, collided with stationery heavy duty trailer while attempting to avoid a truck pusher who suddenly ran across the road.

The car also crushed to death a middle aged man who was standing behind the stationery trailer.

Men of the Federal Road Safety Commission (FRSC) who were on hand to salvage the situation said, after the accident which claimed two lives on the spot, two out of the three that were rushed to a nearby hospital, died later.

The Delta State sector commander of the FRSC, Mr Luke Ikpi could not be reached to confirm the incident.