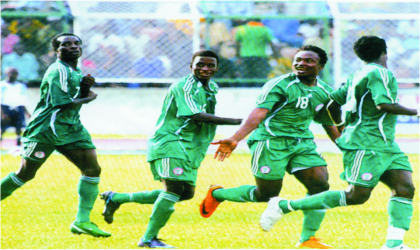 Members of the Flying Eagles that failed to fly at the 2009 FIFA World Youth Championship (WYC), in Egypt.

John Obuh’s Flying Eagles have been drawn in what immediately stands out as the Group of death in this year’s Africa Youth Championships. scheduled for Libya.

At the draw ceremony held in the Radisson Blue Hotel, Tripoli, the Nigerian cadets were drawn with fellow powerhouses Ghana and Cameroon in Group B. Gambia, another formidable side at youth level, complete the pool.

All four teams in the pool are former champions of the tournament. Prior to the competition taking on a tournament format, Nigeria won it four years on the spin from 1983 to 1989.

Cameroon’s Lionceux, Ghana’s Black Satellites and Gambia’s Young Scorpions are among the most feared youth national teams on the continent.

Cameroon won the event when Nigeria hosted in 1995, Ghana hosted and took the title in 1999, beating Nigeria in the final and Gambia were victorious at home in 2005.

Apart from winning the tournament in Cotonou, Benin Republic in 2005 and reaching the final of the FIFA U-20 World Cup in the Netherlands the same year, the Flying Eagles also reached the competition final in Brazzaville in 2007.

Ghana’s Black Satellites are the reigning champions of the world, following a spectacular run in the FIFA U-20 World Cup staged in Egypt between September and October 2009.

Hosts Libya, Mali, Egypt and Lesotho will play in Group A of the competition taking place in Libya March 18  April 1.

Nigeria was represented at the Draw Ceremony by the deputy general Secretary (Technical), Dr. Emmanuel Ikpeme and U-20 Head Coach Sam John Obuh.