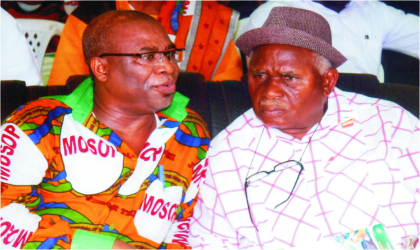 Barely a day to the governorship re-run elections in Delta State, fire has razed down the Independent National Electoral Commission (INEC) office in Ughelli, headquarters of Ughelli North Local Government area of the state.

Though no life was lost in the fire incident, the building was completely razed. Since the unfortunate development, there have been accusations and counter-accusations among political camps in the state.

A source who pleaded anonymity, told The Tide that they woke up at about 5:30am to see the INEC building in flames, accusing fire fighters of not making any efforts to save the building.

INEC materials including voters registers and other valuable electoral materials were said to have been destroyed by the fire. The source lamented plans of those behind the incident to frustrate the election in the area. Several vehicles were also allegedly burnt by the hoodlums. Some of the vehicles reported burnt were said to belong to loyalists of erstwhile governor, Dr Emmanuel Uduaghan.

The Public Relations Officer of INEC in Delta state, Mr. Livy Unuigwe, while reacting to the incident, insisted that election would hold across the state tomorrow, saying, “the incident leading to the burning of the INEC office in Ughelli was uncalled for.”

He insisted that election would hold in the area despite the unfortunate action of the hoodlums, and advised the people of Delta state and Ughelli North to make sure that they exercise their franchise. “The REC has said that anywhere INEC offices are torched, in the course of an election, such elections would be cancelled and not when it has not commenced. Election will hold in Ughelli,” he said.

Delta State Secretary of the Action Congress of Nigeria (ACN), Mr Jaro Egbo, described the incident as unfortunate and accused PDP supporters who were afraid of losing the area to Chief Ovie Omo-Agege of the Republican Party of Nigeria (RPN), for being behind the act.

Egbo said the action of the perpetrators would not stop the election from holding in the area, and urged the supporters in the area to cast their votes for the RPN.

The State Commissioner for Lands, Survey and Urban Development, Chief Fred Majemite, in his own reaction, alleged that PDP opponents were responsible for burning the INEC office.

Mr Sunny Onuesoke, a former PDP governorship aspirant in the state, said the burning was politically motivated. On his part, Dr Joe Oharisi exonerated DPP from complicity in the ugly incident.

The state Police Public Relations Officer (PPRO), Mr Charles Muka confirmed the incident as he said the Police Command was already interrogating the guards attached to the burnt INEC office.

Meanwhile, the Nigeria Police have deployed 22,600 conventional and 2,835 mobile policemen to monitor the re-run election slated for January 6 in Delta.

Mr Audu Abubakar, the Deputy Inspector-General of Police, “B” Department (Operations), announced this in Asaba on Monday during a press conference.

“We have deployed 22,600 officers and men of conventional police and 45 PMF units of 63 officers per unit from various squadrons.

“The Federal Government is determined, INEC is ready and we are given a matching order to be here and ensure that the election is not only credible but free and fair.

The DIG had a closed door meeting with the 14 gubernatorial candidates contesting the re-run election.

Mr Great Ogboru, the Democratic Peoples Party candidate told newsmen that the DIG underscored the seriousness of the election, and that it was a litmus test.

On his part, the state PDP chairman, Chief Peter Nwaoboshi, said the party was satisfied with the security arrangement, and ready for the re-run.