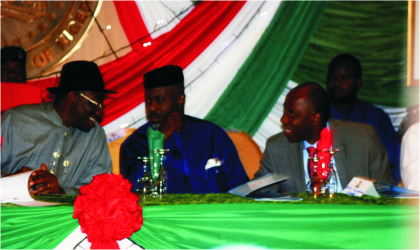 The motion for the adoption was moved by House of Representatives Leader, Hon. Tunde Akogun, and seconded by Rt. Hon. Tonye Harry, Speaker, Rivers State House of Assembly.

The South-South delegates, who met at the Banquet Hall of Government House, Port Harcourt said they took the position having considered the credentials and the performance of the President within a short term in office and insisted that no other aspirant can match the Goodluck/Sambo candidacy.

Speaking shortly after the consensus endorsement, President Goodluck Jonathan thanked the South-South delegates for their level of support to the actualisation of his presidential ambition.

Dr Jonathan said he would justify the confidence reposed in him, and promised not to disappoint the people of the South-South, because his performance would pave way for other persons from the minority tribe to aspire to lead the country in future as well.

He restated his administration’s resolve to tackle challenges in the education sector, stressing that without manpower development, the dream of being among the best 20 developed countries in the world would be a mirage.

The President noted that long queues at the filling station were now a thing of the past, pointing out that the attention given to the power sector would yield positive result by March 2011, when electricity supply would be stable.

On the security situation in the country, Dr Jonathan remarked that the challenge posed by the new wave of crime would be addressed when the National Assembly passes a bill before it, empowering the executive to set up a structure to confront modern trends in criminality.

He promised to lay a solid foundation for the future growth of the country particularly in making sure that the youths, who are leaders of tomorrow, are given the necessary encouragement for self actualisation.

Also speaking, Vice President Namadi Sambo, said for the first time, Nigeria has leaders with knowledge of development, working together to deliver the dividends of democracy to Nigerians.

On his part, the host Governor, Rt. Hon Chibuike Rotimi Amaechi said the people of the South-South had already made up their mind on the Goodluck/Sambo ticket, and all the delegates for attending what he described as a historic meeting in Port Harcourt.

In their solidarity messages on behalf of the six states of the South-South zone, women, youths and elders, Chief Tony Anenih, Senator Joseph Wayas, Deputy Governor of Rivers State, Mr Tele Ikuru among others, assured President Jonathan and Vice President Sambo of the total support of the zone during the primaries and the main election.

Earlier, President Jonathan had visited the Rivers State Council of Traditional Rulers where the Chairman, Theophilus Princewill, reaffirmed their endorsement for him and Governor Amaechi based on their track records of performance.

The President also visited the Rivers State campaign office of the Goodluck/Sambo Campaign Organisation on arrival in Port Harcourt.