Customers besieged banks in Asaba yesterday in a bid to beat the December 31 deadline set by the Central Bank of Nigeria (CBN) to update their accounts.

The banking halls and parking lots were filled with customers and cars, forming long queues beyond the banks’ premises.

This led to traffic build up along major roads in Asaba where some banks are located.

Some of the customers, who spoke with our correspondent, said the CBN should consider extending the closing date for the exercise.

Mrs Cecilia Nwadishu, a trader, lamented that the information came to her very late, adding, “I saw the queue and decided to find out what was happening’’.

“It was then they told me that I must go and update my account or it will be closed after December 31,’’ she said.

Mr Innocent Okogwu, a civil servant, said he got the information on Wednesday when he came to withdraw money from the bank.

Okogwu said: “I based in Lokoja. I came home to celebrate the Christmas and the New Year and I will not go back until January 4, 2011.

“I have never heard of anything like that; I was surprised when I saw the crowd in the bank on Wednesday and I enquired from them and I was told what to do.

“But my major handicap is that I do not have my residence’ NEPA bill in Lokoja here with me.

“So, I have just filled in my home town address and submitted our current NEPA bills,’’ he added.

However, a bank official, who spoke to our correspondent on condition of anonymity, said the order to update account has been on for more than a month but “our people are used to last minute rush”.

“The rush to revalidate actually started on December 23 and the tempo heightened on Wednesday, December 29, immediately we resumed from the Christmas break.

“So far, we have recorded more than 2,000 applications in this branch alone and as you can see, more customers are coming in to make their request,’’ the official said.

The official was not certain if CBN would extend the date but advised that people should make use of the available time.

Banks created special desks to attend to customers, who came to update their accounts and the customers needed to fill a personal information form at the bank and present their national identity card, international passport or driver’s licence as part of the requirements.

The Federal Government has approved the ninth and last evacuation flight for Nigerians stranded in the United States due to Covid-19 travel restrictions.
This was announced by the Consul General of Nigeria in New York, Mr Benaoyagha Okoyen, in a statement dated August 10, 2020, on behalf of the country’s missions in the U.S.
According to the statement, the flight is scheduled to convey the evacuees from New Jersey on August 20 to both Abuja and Lagos.
This would come after the seventh and eight evacuation flights scheduled for August 15 and August 19, respectively, from Houston, Texas, to Lagos.
The government had so far evacuated 1,739 stranded Nigerian citizens in six special flights from the U.S. which is witnessing a second wave of Coronavirus infections.
That country’s Covid-19 tallies as at Monday stood at 5,044,864 infections with 162,938 deaths, according to data compiled by the John Hopkins University of Medicine. 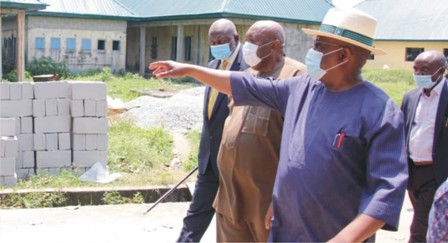 The Rivers State Governor, Chief Nyesom Wike has decried the encroachment of government land in the state.
He described as unfortunate the excuse by residents to encroach on the land owned by Government Comprehensive Secondary School, Borikiri, Port Harcourt.
The governor made the observation, yesterday, when he visited the school to see the extent of encroachment there.
“It is most unfortunate that our people will always want to encroach on school land believing that nothing will happen. This is not acceptable. I pray that this does not continue.
“This is because another government can come up tomorrow and bring down such illegal structures. People will then bring ethnic colouration to it.
“I have endorsed the redesign of the Government Comprehensive Secondary School, Borikiri in order to restore its former glory.
“The school, which had made the state proud and produced eminent Nigerians cannot be allowed to die.
“I believe that this is one school that has made name for us. Nigerians and Rivers people should know that we cannot kill it.
“We will do everything we can do to bring it back to its lost glory. We may not demolish all the structures because of those erected as historical symbols,” he stated.
Wike applauded the Old Boys Association of the school for showing interest in restoring the glory of the school that made them to be responsible citizens, and also commended them for setting up a technical committee to achieve their goal.
“I am happy with their concerns. If Old Boys of other schools can show the kind of support these ones are showing to their school, I think we will go a long way.
“The Old Boys Association has agreed to set a technical team. They will do a redesign of the entire school based on the available land because there was too much encroachment.
“We are going to give them all the necessary support to achieve maximum result. They will also supervise the construction work themselves to ensure that they get the quality they want,” he added.
President of the Old Boys Association of the School, Noble Abe, thanked the governor for supporting the vision of the association.
He said almost fifty percent of land belonging to the school has been illegally taken over by residents but they are willing to make use of what is available in restoring the school.
“Close to 50 percent of the land owned by the school has been encroached upon. The governor in his magnanimity has decided that we should restore as much as what is left,” he stated.
Meanwhile, the Rivers State Governor, Chief Nyesom Wike, has approved the dissolution of the State Task Force on Illegal Street Trading and Motor Parks with immediate effect.
Consequently, the Special Assistant to the Governor in charge of the Task Force, Mr. Bright Amaewhule has been relieved of his appointment.
A statement by the state Commissioner for Information and Communications, Pastor Paulinus Nsirim, yesterday, directed members of the task force to return the operational vehicles and Identity Cards of the body to the Office of the Secretary to State Government not later than 4p.m today.
“They will be paid their salaries as they return the vehicles and Identity Cards. Government will reconstitute the Taskforce after proper orientation and training”, the statement added. 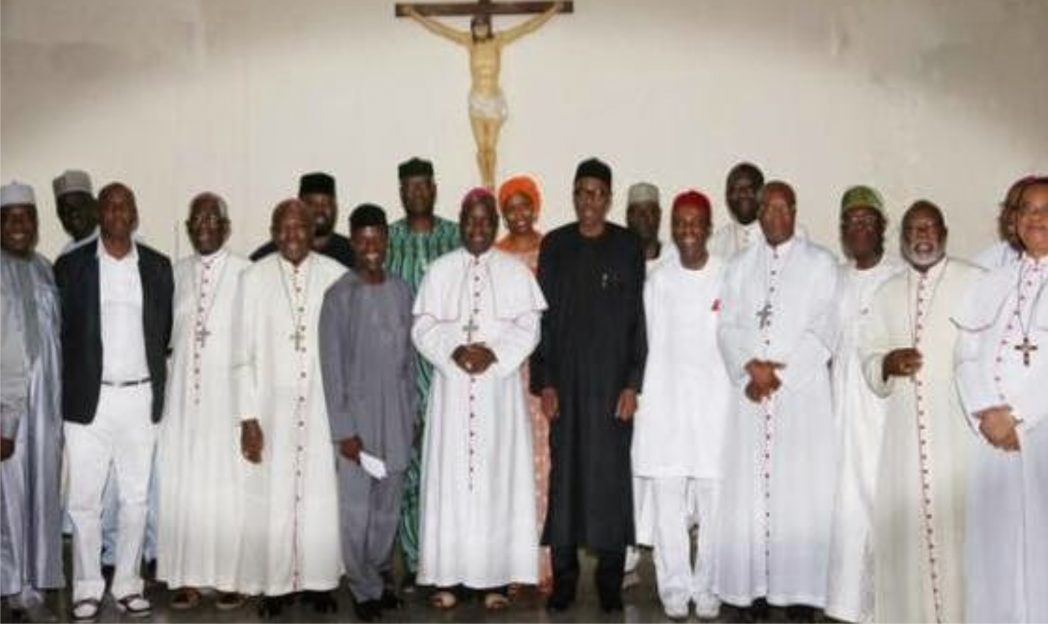 For the umpteenth time, the Catholic Bishops’ Conference of Nigeria (CBCN) has expressed their worry over the insecurity ravaging parts of the country.
In the face of this concern, they have declared 40 days of joint prayers against terrorism and banditry.
The Bishops, in a statement issued in Abuja, yesterday, also decried the pervasive corruption in the land and the nation’s dampening economic outlook.
They, therefore, passed a verdict, saying the Federal Government had failed to keep its core campaign promises of security, corruption eradication, and economic growth.
The statement signed by CBCN President, Archbishop Augustine Obiora, on behalf of all the bishops reads: “We, the members of the Catholic Bishops’ Conference of Nigeria have been following the recent events in Nigeria closely.
“We continue to hear of increasing insecurity and unabated acts of terrorism in Northern Nigeria. So, we are all tired of this situation.
“We do not want any politician to politicise the killing of Nigerians. There should be one response from everyone, and that is; the killings must stop.
“Our hearts are bleeding, and we are more troubled when we hear of the massacre presently going on in Southern Kaduna. We want all the people suffering the incessant attacks in Southern Kaduna to know that all Catholics in Nigeria are praying for them.
“We call on the Federal and the Government of Kaduna to bring a complete stop to the killing of innocent people. The loss of the life of any Nigerian does not help to further the agenda of any religious ideology or the ambition of any politician.
“The perpetrators of the killings must be brought to justice. Where there is no justice or justice is not seen to be done, there cannot be peace. Where there is no peace, there cannot be development.
“Any Government, State or Federal that wants peace must work for justice for everyone. There will never be sustained development built upon the bloodshed of innocent people brutally murdered by religious fundamentalists without any recourse to justice for the victims.
“We need not remind Nigerians that the present Federal Government came to power, promising Nigerians, the eradication of corruption, a guarantee of security to life and property, and rapid growth in the economy.
“The creation of jobs, and an enabling environment that engenders growth of the private sector; a significant increase in the supply of electricity to Nigerians, affordable and quality health care to Nigerians, and the revamping of the educational sector were the promises the Government continues to make.
“Many Nigerians, irrespective of political party affiliation, will affirm that these promises have remained a far cry. We strongly appeal to Nigerians to unite together in calling the Federal Government to give priority to these areas of our lives.
“To all Catholics, we request that you join in praying for forty days, starting from August 22, 2020 and ending September 30, 2020, the eve of Nigeria’s Independence Day.
“On Independence Day, let us join in praying to start from 12noon. We appeal to each Bishop to encourage the faithful in his Diocese to participate fully in this prayer for God to save Nigeria.
“Finally, as we pray, we know that God wants us to do what is humanly possible to ensure that there are prosperity and freedom for every Nigerian.
“Let us not harbour hatred for anyone. We must be instruments of forgiveness and reconciliation. We must be on the part of justice for all and peace in Nigeria.
“May God grant eternal rest to all who have lost their lives to the violence in Northern Nigeria and other parts of the country. May God give us the courage to work for justice and peace in Nigeria.”