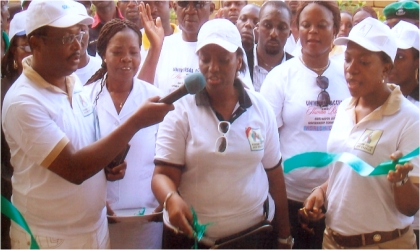 The Joint Military Task Force (JTF) will remain in the Niger Delta until people can go about their normal duties freely.

The Chief of Defence Staff, Air Chief Marshal Oluseyi Petinrin, made the announcement in Abuja on Wednesday while interacting with defence correspondents.

He stressed that JTF would remain in the region as long as the people needed additional security to go about their normal businesses.

“Right now, you can see communities dissociating themselves from some of these criminals. That is to show you that the people are recognising them for what they are.

“They know that the JTF is actually there to help them to make sure there is peace so that they can go about their normal duties.

“Before now, no community was brave enough to dissociate itself from any of these people. But now, we have people coming out to say we have nothing to do with them,” he said.

According to the defence chief, anybody who is still lurking around the region for unwholesome reason is actually a criminal and I want to say that this is no longer acceptable.

Petinrin advised the hoodlums to leave and go and get something useful to do, stressing that the days of kidnapping people and going about as if there was no law and order had gone.

“And anybody who does not recognise that will pay for it. Nobody has ever stood against any government and won.

“So, if anybody is still hiding in the creeks and indulging in criminality and hoping to be given amnesty later is joking.

“There is no longer amnesty because we know that those who were fighting for a cause have actually taken advantage of the amnesty and they are now in their various communities doing useful things.

“Take for example, a criminal who has a card and has already been registered by the Amnesty Committee.

“He was taking money from government and any time he finished the money, he will rush to the creeks to kidnap people to collect money. That is a criminal.

“How can you say that person is fighting a cause? He is fighting for himself. People should fight for themselves by working hard to maintain themselves and family,” he added.

“When you sensationalise things, people could blow them out of proportion. When you report sensationally, the ordinary man thinks that is the way things are.

“When confused about anything, please clarify with us as we are always here to tell you and from time to time we shall organise enlightenment and interactions to brainstorm together.

‘No Vacancy In Rivers Brick House’