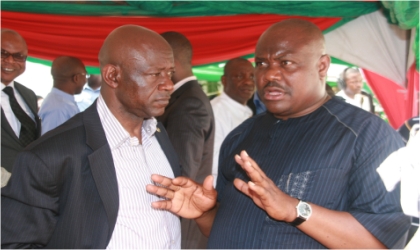 A political pressure group in Rivers State, Amaechi Vanguard (AV), says there is no vacancy in the Rivers State Government House come 2011.

The state leader of the group, Comrade Loveday Michael Jaja who stated this shortly after the official commissioning of the Chibuike Rotimi Amaechi campaign secretariat in Port Harcourt on Tuesday said the infrastructural developments in the state was the visible and eloquent testimonies of the excellent performance of Governor Amaechi’s administration for which reason he is qualified to gun for a second term as state governor.

Comrade Jaja however said that he was not surprised to learn that some persons whom he described as people who do not have electoral values had left the Peoples Democratic Party (PDP) for other unknown political parties in the state.

He argued that those who left the party did so because the record set by the state governor was too high for them to surmount, hence, they have no other option than to leave the party.

He wished the decampees well in their future endeavours but reiterated the PDP’s willingness to welcome them whenever they retraced their footsteps and returned to the party umbrella.

On how to ensure victory for Governor Amaechi, the leader of the Amaechi Vanguard, said the group had gone into sensitation of people between the ages of 18 and above to ensure that they register during the voters registration exercise.