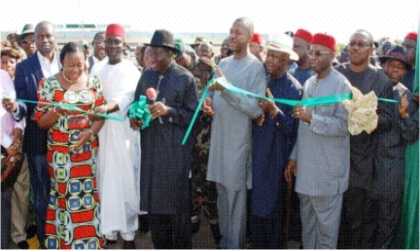 The six-day Rivers State Carnival (CARNIRIV) has come to a close with lots of fanfare, celebrations and colour in the city of Port Harcourt.

The festival which was running for the third year witnessed new additions as this year’s edition ran for almost a week with competitions in boat regatta and free style parade.

As at last Monday when the event commenced, the children’s band opened the floor as it paraded along the Elekahia area through Stadium Road in the metropolis.

The second day witnessed the different cultural performances from the various local government areas as Opobo, Bonny, Okrika and Khana thrilled the crowd with their flamboyant masquerades and dances.

Before the cultural performances on Wednesday, spectators were thrilled with a special boat regatta in the morning  at the Tourist Beach in Port Harcourt.

Later in the evening of Wednesday, the cultural performances from the local government areas continued with Omuma, Andoni, Tai, Eleme and Obio/Akpor taking their turns.

On Thursday, evening Ahoada-West, Ahoada-East, Etche, Akuku-Toru and Asari-Toru took their turns in the various cultural displays that lasted for 20 minutes each.

Friday witnessed the different local government areas heritage floats. The float parade which commenced about 10.00am from Rumuola terminated at the Old Port Harcourt Township, as the evening was capped with a special Old Port Harcourt groove.

On Saturday, however, another street parade was held. The fresh style bands street parade took-off from Ikoku Junction along Ikwerre Road, went through Aba Road from Water Lines, proceeded through GRA Junction and ended at the CARNIRIV Village at Elekahia Stadium.

In the frestyle category, Liberation Band clinched the first position while the Fusion Band came second. The Treasure Band was adjudged the third. All the groups were judged on choreography alone.

Awards given to the winners include a Hiace Bus to Obio/Akpor, for emerging first, Okrika took a saloon car and also got N1 million for emerging the best in boat regatta.

Speaking at the closing ceremony, the Rivers State Governor, Rt. Hon. Chibuike Rotimi Amaechi said, the 2011 edition of CARNIRIV would have between N10 and N15 million as prize money as against the N1 million for this year’s event. This, he said, was to challenge participating groups to work hard to win.

Governor Amaechi also promised that next year’s edition would be better organised in line with the present administration’s resolve to bring back Port Harcourt to what it used to be or make it better, noting that “Rivers people must move forward and have the opportunity to enjoy their lives”.

The governor urged the people to resist politicians who would want to take the state back to the dark days, stressing that the successful hosting of the CARNIRIV had shown that security has greatly improved in the state.

“I promised you that the greatest duty I owe you is to restore security, but I will need you to fight along with me to make sure that by next year, we can hold this CARNIRIV here”, Governor Amaechi declared.

Not For The Money …Why I Should Be A Senator