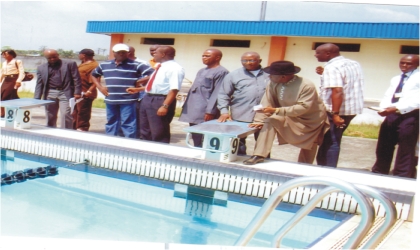 Rivers State, hosts of the 17th National Sports Festival tagged, “Garden City Games 2010” billed to hold in Port Harcourt in February, 2011. says it is set to set new standards in the history of the festival.

The state governor, Rt. Hon. Chibuike Rotimi Amaechi, said this yesterday when a technical delegation of the Main Organising Committee (MOC) led by the Secretary of the MOC, Alhaji Abba Yola, visited him in Government House, Port Harcourt.

Represented by his deputy, who is also the chairman of the Local Organising Committee (LOC) and Vice Chairman of the MOC, Engr Tele Ikuru, stated that every concern regarding the hosting of the event is being addressed, noting that though the major issues had been taken care of, there were still some challenges.

The state chief executive expressed appreciation for the goodwill and collaboration of the MOC so far, disclosing that funds for the festival had already been released, pointing out that over N25 million has already been deployed for publicity, reassuring of the government’s commitment to ensure the success of the event.

Earlier, Alhaji Yola debunked the rumour that the hosting right was to be withdrawn from the state, reiterating that “we are convinced that, from what we have seen, Rivers State is fully ready to host the festival,” adding that “the festival belongs to Rivers State.”

He urged the state government to do more publicity to properly enlighten the nation and the international community of the forthcoming event, noting that the delegation identified transport, renovation of existing facilities and publicity as challenges, calling on the government to review the structure and size of the Adokiye Amiesimaka Stadium being built to accommodate more sports.