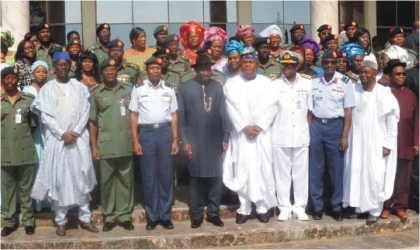 President Goodluck Jonathan(middle) in a group photograph with Service Chiefs, newly decorated army officers and their wives, in Abuja, yesterday.

The Economic and Financial Crimes Commission (EFCC), has convicted 65 persons and recovered the sum of $3.5 billion in funds and assets between December 2009, till date.

The commission has in addition, consolidated on the provision of prompt investigations and assessment of intending international business through the Transaction Clearance Platform (TCP), as well as forestalled thousands of would-be foreign and local investment frauds.

Disclosing this in a keynote address in Enugu, yesterday at the International Day Against Corruption, organised by EFCC in collaboration with Anti-corruption Revolution (ANCOR), Enugu state chapter, the executive chairman, EFCC, Mrs Farida Waziri, expressed happiness that the commission had in the past years made considerable progress in its effort to curb corruption, economic and financial crimes.

According to the EFCC chairman whose address was read on her behalf by Aminu Ado Aliyu, of the Enugu office of the commission, the theme of this year’s celebration, “Honest Leader for a Better Nigeria”, was carefully chosen by the commission to address the need for the electorate to not only cast their votes wisely, but also to look beyond the INEC, selection criteria at the individuals, their personal lives, their antecedents and their background’s, including work, family and community development.

Her words: “This is because we believe that good governance begins with election of credible and forthright leaders. We have in the year seen impressive improvements Revolution (ANCOR) at the national, state and local levels. We have recorded unprecedented public support which goes further to tell how fed up ordinary Nigerians are with corruption.”

Farida Waziri used the occasion to commend all the groups that had been working tirelessly to develop strategy to curb corruption in Nigeria. The EFCC boss expressed optimism that with the recent engagement of the legislators as stakeholders, “When the time was ripe for the legislators to play a part of bringing the strategy to fruition, they would give it express attention it deserves by ensuring necessary legislative backing for the good of the present and future generations.”

Also speaking, the chairman of the occasion, Prof. Richard A. C. Achara, stated that corruption thrived in a country where the normal system of doing things had broken down and where there was confusion.

“Corruption also takes place where people don’t respect themselves. If one has self-respect, he wouldn’t engage himself in any form of corruption,” advising Nigerians to shun corruption at all times.

On lecturers who insist in sleeping with female students before they pass their courses, Achara made it clear that any female student in institutions of higher learning who was scored low marks by a lecturer because she refused to sleep with him, hasd the right to protest to the school authorities and at the same time request for a re-mark of her answer scripts, adding that this would be carried out by an external body that was entirely neutral.