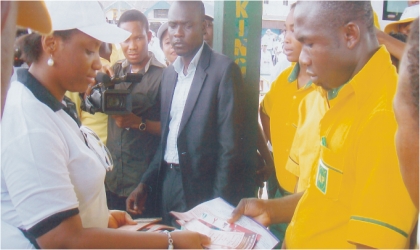 Governor Chibuike Rotimi Amaechi of Rivers State has said that his administration would not spend one naira out of the N27billion reserved savings of the state government, which had accrued from the monthly N1 billion compulsory saving.

Governor Amaechi who stated this Wednesday during the launching of Change Rivers State initiative held at Hotel Presidential, Port Harcourt, said the state government would not touch the money despite the recent fall in the state revenue.

The governor said the compulsory N1 billion monthly saving was backed by law and the saving was for future use of the state, noting that the present state government would continue to abide by that law.

He explained that already the Deputy Governor, who is the Chairman of the state Investment Committee, had signed agreement with Skye Financial Services Limited, Stanbic IBTC Bank and First Trustees Limited to invest the funds on behalf of the state.

The State Chief Executive, said on assumption of office in 2007, he realised that a lot of things had gone wrong and needed to be corrected, thus the dream of a change initiative was born to either move the state forward or at least restore the good old days of Port Harcourt as the garden city of Nigeria where people from all parts of the world felt comfortable to live and do business.

Governor Amaechi, observed that the state now has a new brand called “Rivers Brand” stressing that Rivers people can do whatever anybody in any part of the country can do, if given the conducive environment to operate.

“As we approach the 2011 election, you must choose the right candidate that will fit into the change that we are talking about, therefore you must vote the right people at the various levels of government”, the governor declared.

He opined that the electioneering process for 2011 should be value driven so that those that had served in government before could explain to the people what they did when they had opportunity to serve, emphasising that as governor, he does not lack the courage to take difficult decisions that would better the lives of the people in future.

The governor said he stood firm to fight criminality in the state to create room for change, pointing out that “we are not here for popularity test but to do the right things for the benefit of our people”.

Governor Amaechi, therefore, urged the people to come out to register for the forthcoming voters registration exercise, select the best candidates, vote for the person and protect the vote to avoid rigging in the new spirit of one man, one vote.

“I accept the challenge to campaign for votes and in my campaign, I will point at the projects in the communities, including the state’s free education and health”, Governor Amaechi stated, while announcing that Prof Alice Nte of the University of Port Harcourt now heads the board of the primary healthcare system.