Despite the draws for the 2011 FIFA Women World Cup in Germany next year, which pitched Nigeria’s Super Falcons in a seemingly difficult Group A, alongside hosts and defending champions, Germany, emerging women football powers, Canada and France, some Nigerians are tipping the Falcons to qualify from the group.

The Falcons only last week fell 8-0 to Germany in a friendly match but coach of Rivers Angels FC of Port Harcourt, Mr Whyte Ogbondah has expressed confidence that the Nigerian girls will survive in the group.

Reacting to the draws yesterday, Ogbondah said that Germany would be the major threat to the Falcons, while France and Canada can be handled if the Nigerian team plays to her potentials in the two matches.

“Falcons can scale through in their group, emerging from Group A,” said Ogbondah.

Also, the captain of Rivers Angels, Lucky Atu expressed optimism that the Falcons would make Nigeria proud in Germany.

She picked the German team as the strongest team of the group on paper and expects the Falcons to overcome the hurdle posed by the other teams.

Atu, however, called on the Nigeria Football Federation, NFF and the team’s technical crew to ensure adequate preparation and enough quality international friendlies for the Falcons. 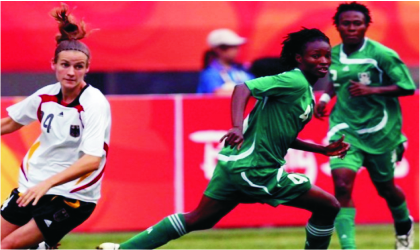