The Senate Committee on Niger Delta Development Commission (NDDC) has directed the Minister of Niger Delta Affairs, Elder Godsday Orubebe to “unfailingly” appear before it next Tuesday over coastal roads.

The Chairman of the committee, Sen. James Manager, who gave the directive, said the appearance of the minister and his team was vital to the clarification on the seeming duplication of the design, survey and construction of coastal roads in the Niger Delta by both the Federal Government and the NDDC.

He said that although the committee had severally written inviting the minister on the issue, Orubebe had failed to appear before the committee.

Manager explained that although the ministry had responded in writing, he said “we need to have the minister and his team here to enable us clarify these issues because so many millions of naira are involved and to avoid the duplication of efforts”.

“Although the NDDC Chairman and his team are here, we will shift this meeting to Tuesday.

“We have again invited the minister who must be here with his team to make this clarification because we in the committee see that there is an overlap in the budget process for these roads,” he said.

Meanwhile, the Senate yesterday confirmed the appointment of Elias Mbam as Chairman of the Revenue Mobilisation, Allocation and Fiscal Commission (RMAFC).

The Senate also confirmed the appointments of 20 others as members of the commission.

It, however, deferred the confirmation of the appointments of the nominees from Abia and Enugu States respectively.

President Goodluck Jonathan had in October submitted a list of the nominees to the Senate for screening and confirmation.

Although Sen. Zaynab Kure (PDP-Niger South) led committee on National Planning, Economic Affairs and Poverty Alleviation report described the nominees as qualified, proper and fit persons to serve in the commission, the Senate stood down the confirmation of Sen. Chris Adighije and Umeh Odika from Abia and Enugu States.

Deputy Senate President Ike Ekeremadu pleaded with the Senate on the nominees, but it stood down consideration and confirmation of the appointment of Odika to “allow us resolve some outstanding issues.”

Senate President David Mark also requested that the Senate defer the consideration and confirmation of the appointment of Adighije “because I need to clarify some issues before we can proceed on his confirmation”.

“He is my personal friend and I have discussed with the Senators from Abia on this issue because I do not want us to take a decision which we will later have a re-think on.

“I should be able to report back to the House within the week,” Mark said.

In their contributions, all senators commended the committee’s report and overwhelmingly agreed that the appointments of the nominees be confirmed by the Senate.

Sen. Bode Olajumoke (PDP-Ondo), however, advised the membership of the commission to look beyond mobilisation to generation of revenue for the commission.

Sen. Ahmed Lawal (ANPP-Yobe) said that “in future, government should ensure that younger and qualified Nigerians should be considered along their much older counterparts.”

In his remarks after confirmation of their appointments, Mark said that there was the need for the appointed members to be dedicated and fair in the discharge of their responsibilities as “the commission is very important in the development of our economy.” 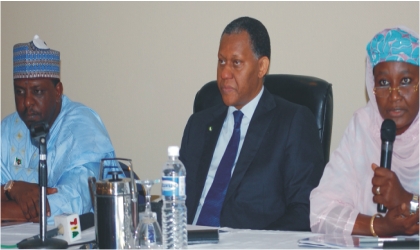