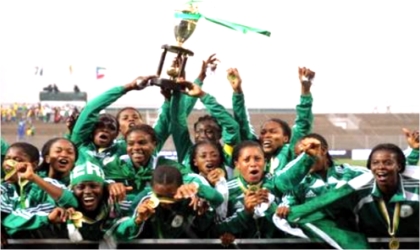 It was the seventh edition of the championship.

Both teams met at the semi-final of the 2008 edition in Malabo, Equatorial Guinea, where the hosts defeated the Super Falcons.

The Falcons recorded a 100 per cent performance, winning in all the five matches played, scored 19 goals and conceded four.

Perpetua Nkwocha, the highest goal scorer of the championship with 11 goals, scored the opener for the Nigerian side in the fifth minute of the game.

The hard-fighting and youthful Equatorial Guinea team equalized through Carolina Pereria owing to a defensive blunder by the Nigerian defence early in the second half.

Desire Oparanozie put Nigeria ahead with a header, while the hard fighting Equatorial Guineans gave in to pressure and conceded an own goal through Pereira.

The Equatorial Guineans through Mamello Makhabane got their second goal in the 30th minute, while five minutes later a cross from Stella Mbachu was put in by their defender for the second own goal.

Falcons beat Mali 5-1 in the first match, defeated the hosts Banyana Banyana 2-1 and Tanzania 3-1 in group A to top the group with maximum nine points.

At the semi-final, Falcons beat Cameroon 5-1 to book a place in the final. In the third place match played earlier on Sunday, Banyana Banyana beat Indomitable Lionesses of Cameroon 2-0.

Nigeria and Equatorial Guinea have qualified to represent Africa at the 2011 World Cup in Germany.

Nkwocha won the highest goal scorer award, while Mbachu is the tournament’s Most Valuable Player.

Meanwhile, Football enthusiasts in the FCT want Coach Eucharia Uche of the Super Falcons to work more on the team ahead of the World Championship in Germany in 2011.

Reacting to the team’s 4-2 thrashing of Equatorial Guinea in yesterday’s finals at the Africa Women Championship (AWC) in South Africa, some of the fans said the team needed to work harder for them to do better in the World Cup.

Although the Super Falcons took an early lead in the 6th minute of the match, they were equally matched by the Equatorial Guineans throughout the encounter.

The Super Falcons, however, secured victory through two defensive blunders by the Equatorial Guinea’s defenders.

Former Super Falcons Assistant Coach, Monsur Mohammed, says the team needs to work harder to consolidate on its victory at the AWC.

“They have done well by reclaiming the title from the Equatorial Guineans.

“But they still need to work harder, you could see that out of the four goals they scored, two were own goals and their opponents had the ball possession.

“These suggest that they really need to work harder,” he said.

The ex-Super Falcons coach advised the team to use next month’s friendly match against Germany to pinpoint loopholes in the team.

He also called on relevant authorities in the country to improve on the incentives given to female national teams taking part in international competitions, describing what was given to the Super Falcons as “paltry”.

Godwin Bamigboye, a sports administrator, said that although victory was good for the Super Falcons, there was a need for the team to work harder.

“There is need for general improvement in the team ahead of the World Cup.

“The World Cup is a bigger challenge and the oppositions are tougher, so we need to work hard ahead of the competition,” he said.

Bamigboye was, however, optimistic that the two finalists at the AWC would represent Africa well at the World Cup.

“Equatorial Guinea and Nigeria will be respected at the World Cup given their display in today’s final.

“I think they will be worthy representatives of Africa in the World Cup,” he said.

Umuteme Benjamin, an Abuja-based football fan, said the Super Falcons’ achievement under its first female coach (Eucharia Uche) goes to show how the game had grown in Nigeria.

He said the team under a female coach showed signs of better understanding between the coach and the players.