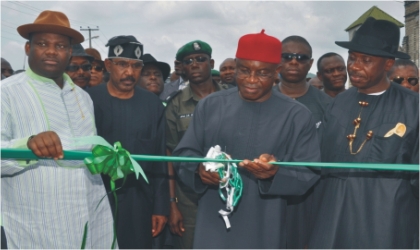 The President of the Nigerian Senate, Senator David Mark, has said that the Governor of Rivers State, Rt. Hon. Chibuike Rotimi Amaechi, has fulfilled the purpose of his coming to power, by delivering on his mandate.

Senate President Mark gave the pass mark during a State Banquet to mark the third Anniversary of Governor Amaechi led administration in the State.

The Senate President, who was represented by Senator Olorunmbe Mamora, said the divine manner in which Governor Amaechi occupied Government House has helped him to fulfill his purpose in aspiring to lead the people of the state.

According to him, “what I have seen since my arrival has satisfied me, that he has delivered on his mandate and when you have a leader who understands his mission in government the difference would be clear.

He noted that the kind of schools and health centres provided by the Rivers State Government were of international standard, and prayed God to give the governor the strength to continue to lead the state, adding that Rivers people made the right choice in Governor Amaechi

Also speaking, the Governor of Cross River State, Senator Liyel Imoke described Governor Amaechi as a gentleman that has undergone transformation and that has translated his vision into good governance for the state.

Senator Imoke said the Rivers State Governor was a straight forward, an honest and courageous leader committed to delivering on promises, pointing out that he had learnt a few things from Governor Amaechi in course of their interaction.

The Cross River State governor said he came to identify with the success story of the Rivers State Government in three years, saying, “1 always admire his administration because few governments embark on programmes which do not die after but projects die soon after the initiator lives”.

Earlier, Governor Amaechi said the state government would organise a retreat to address the issues of sustainability in education, infrastructure and health in the state.

Governor Amaechi said his administration was conscious of its determination to remain prudent in the management of resources and assured that he would do its best and not to disappoint them.

Meanwhile, Edo State Governor, Comrade Adams Oshiomole, says the 3rd anniversary celebration of his Rivers State counterpart, Rt. Hon. Chibuike Rotimi Amaechi is a celebration of the story of success and not a story of lamentation.

Comrade Oshiomhole made the assertion  on Wednesday in an interview with Government House correspondents in Port Harcourt.

The Edo State governor told the correspondents that he personally came to Port Harcourt to take part in the celebration because there was much to celebrate in Rivers State.

“We have seen massive road construction, huge investment in primary, post primary education, health, Monorail, city transport, power, employment of medical doctors and nurses in a period of 36 months,” Governor Oshiomhole declared, emphasising that the anniversary celebration was indeed a celebration of what was on ground.

He further said, “I have come because we learn from those who have made a success story of themselves that can be replicted”, expressing his happiness for the people of Rivers State and governor Amaechi whom he described as a genuine friend and comrade.

The Edo State Chief Executive, who noted that things were beginning to change in the Niger Delta, opined that while governments of the region continue to ask for more attention of the Federal Government, they should make the best out of the resources available.

Comrade Oshiomhole pointed out that one thing that had changed among governors of the Niger Delta was the political will to make things happen, and called on the people to be steadf9st in their support for their leaders.

A Needless Outburst …Those Abia Blabs Against Amaechi