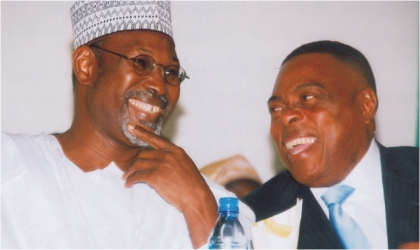 Disaster was averted on Wednesday when an over head tank of a multi-million naira regional water project billed for commissioning by President Goodluck Jonathan at Otuagbadi in Ogbia Local Government Area of Bayelsa State collapsed a few minutes after the Deputy Governor of the state, Hon. Wenipre Seibarugu left the site.

Hon Seibaguru was on a project tour of on-going projects billed for commissioning by President Goodluck Jonathan before the regional water tank collapsed.

Although no life was lost, the incident caused a severe panic among the workers on site and the entourage of the deputy governor.

It was gathered that the rural water scheme tank caved in when the contractor was carrying a test-run of the projects ahead of commissioning by Mr. President as he visits the state today.

Sources said the incident happened when workers were pumping water into the tank to commence a test run of the project.

The contractor of the project was immediately arrested following the incident in which government source said was embarrassing.

Confirming the collapse, Special Adviser on Media to Governor Timipre Sylva, Mr.Preye Wariowei told our correspondent that, no death  was recorded during the Ogbia mayhem.

H e also confirmed that the deputy governor was on inspection tour of the water project at Otuagbagia when the tank collapsed and declined further comments on the sad incident.

A member of the community who pleaded anonymity said a complaint had earlier been made about the poor quality of the job but regretted that the officials of the state government failed to take action.

Meanwhile, security has been beefed up in and around Yenagoa, the Bayelsa capital, ahead of President Goodluck Jonathan’s official visit today.

Our correspondent reports that commuters and motorists are being searched thoroughly, while the state’s police command is working round the clock to make the visit hitch-free.

Our correspondent also reports that the Bayelsa police special security outfit, ‘’Operation Famous Tamgbe”, has intensified efforts in patrolling the streets of Yenagoa to keep the  peace.

Apart from the internal security arrangements, soldiers from neighbouring states have been deployed to the military Joint Taskforce, ‘‘Operation Restore Hope’’ headquarters, located at Opolo in Yenagoa.