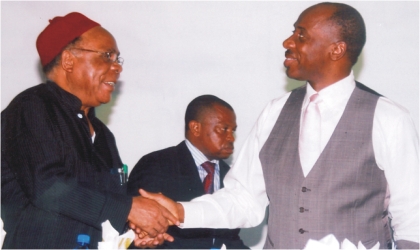 Governor Chibuike Rotimi Amaechi of Rivers State (right) in a handshake with the National Chairman, Forum of States Independent Electoral Commission of Nigeria, Prof S.O.Enejuaiwe, during the formal presentation of a book, ‘Making The Votes Count,’ at the House of Assembly Complex, Port Harcourt, yesterday. Photo: Chris Monyanaga

Rivers State Government says over 50,000 persons have been displaced in the state as a result of the of dredging activities of the lower River Niger.

The Commissioner for Information and Communications, Mrs. Ibim Semenitari disclosed this Wednesday while briefing Government House correspondents on the outcome of  the State Executive Council meeting in Port Harcourt.

Mrs. Semenitari said the State Executive Council received report of the state committee on flood ravaged areas of Ndoni and surrounding communities in Ogba/Egbema/Ndoni Local Government Area of the state, which indicated that over 50,000 persons had been rendered homeless because of the dredging activities of the lower Niger River by the Federal Government.

In view of the enormity of the flooding, she said, the state government would make representations to the Federal Government for special intervention to help those displaced by the flood and to cushion the effects of the incident.

The information Commissioner, however, said  that the state Governor, Rt. Hon. Chibuike Rotimi Amaechi would equally be communicating the incident to the President, Dr. Goodluck Jonathan with a view to getting quick response.

The Ndoni axis of the state is situated along the coast line of the lower River Niger but had not witnessed the kind of unprecedented flood before in the area that had rendered many persons homeless.