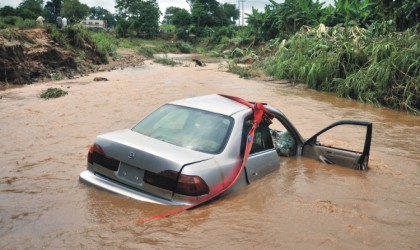 One of the two cars swept off the bridge at the Old Karmo River due to heavy down pour in Abuja, yesterday. Four occupants of the vehicles were confirmed dead.

The last seem not to be in sight in the political crisis rocking Bayelsa State as kinsmen of the impeached Deputy Governor of the state, Mr. Peremobwei Ebebi have given 7 days ultimatum to pull out of Governor Timipre Sylva-led administration in the state.

This is just as political observers are seeking interpretation to Thursday’s Federal Court of Appeal ruling on a ground of appeal before by the impeached Deputy Governor, Mr. Peremobowei Ebebi that status quo must remain.

Angered by the recent development in the state polity, a group led by the Chairman, Central Zone, Ijaw Youth Council, Comrade Jonathan Lokpobiri, in a statement given a 7day ultimatum to all political appointees from the area to resign their appointment.

The group queried the swearing-in of Hon Werinipre Seibarugu as the new Deputy Governor of the state, describing it as rape on democratic structure, bearing in mind that the impeached Deputy Governor is from Sagbama/Ekeremor Federal constituency.

His submission: “the impeachment of political office holders in the country is no case without antecedent. But equity and fairness demands that we be just and fair to replicate same office with another person within that political area.

The group queried, “why so treat the people of Ekeremor with such passion, indignity and inter segregation, thereby sending the people into political extinction?  Could this action mean that we do not have even one person from Ekeremor or Sagbama who deserved the office of the Deputy Governor of Bayelsa State.”

While the group is agitating for upholding of zonal formula, confusion has continued to trail the ruling of Court of Appeal, Port Harcourt, presided over by a panel of three justices led by Suleiman Galadima, directing both parties in a suit before appellate court to maintain status quo ante bellum pending the determination of the matter brought before it by the former deputy governor, Hon. Peremobowei Ebebi.

The court, presided over by a panel of three justices led by Suleiman Galadima, further warned both counsel to advise their clients to abide by the rules and respect its directives.

On counsel’s appeal for accelerated hearing, the court directed that all the parties to the matter be served the necessary documents within seven days, while replies by respondents were expected within 30 days, and adjourned the matter till October 13.

However, the crux of the matter is the exact status quo to be maintained-the one before the swearing-in of the new Deputy Governor, Hon. Werinipre Seibarugu or after the swearing-in?

Ebebi was impeached by the Bayelsa State House of Assembly on June 24 over sundry allegations and his successor, Wenipre Seibarugu, was expected to be sworn in at 2 p.m. on Thursday.

On counsel’s appeal for accelerated hearing, the court directed that all the parties to the matter be served the necessary documents within seven days, while replies by respondents were expected within 30 days, and adjourned the matter till October 13.

Respondents are granted leave to file any further document they deem fit and the appellant is given 14 days to file his briefs. The case is now adjourned till October 13, 2010 for hearing of substantive appeal.

Meanwhile, the Action Congress, (AC) has described the Court of Appeal directives to return to status quo pending the determination of the suit before it as a mark for the respect for proceeding for the rule of law, fairness and equity which Yenagoa High Court unconstitutionally ignored.

The ruling, according to a statement signed by its state Chairman, Comrade Miriki Ebikibina has further vindicated the earlier position of the party on the need for respect for rule of law, equity and fairness on the controversial impeachment saga.