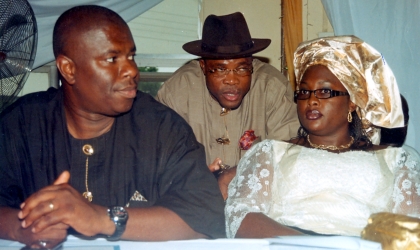 A gang of sea pirates, late last Friday, killed a foreign seafarer and abducted 12 others in an attack on two cargo vessels off Bonny coast in Rivers State .

The crew members of BBC Palonia are from Germany, Latvia, Lithuania, Russia and Ukraine.

She said: “Commander Navy Pathfinder informed (Police) Command that on 2/07/2010 that pirates attacked Cargo Vessel BBC Palonia and one other at about 1800hrs, from South of Bonny FWB.

“The crew is eastern European. One confirmed shot dead, others taken hostage. Nigerian Navy already deployed from Bonny to investigate”.

The Joint Task Force and the Navy immediately went into a meeting to assess the situation.

Commodore David Nabaida of the navy, told our correspondent that pirates boarded the German-flagged cargo ship Friday night off the coast of the Niger Delta near the Bonny River fairway. A struggle broke out during the attack and pirates shot one crew member in the leg during the fight, Nabaida said.

Nabaida said the Nigerian navy escorted the ship to safe waters and transported the wounded Ukrainian sailor to a local hospital. The sailor was in stable condition, yesterday afternoon, he said.

“All efforts are being made to … rescue the kidnapped crew,” the commodore said.

Nabaida said the navy had suspects in mind for the attack, but declined to offer further details. He said the crew consisted of sailors from Germany, Latvia, Lithuania, Russia and Ukraine.

The attack comes after 12 pirates in speed boats attacked a bulk carrier in the same area June 27. The International Maritime Bureau, which tracks piracy worldwide, reported that the pirates shot at crew members with locally made firearms while trying to board the ship. Crew members repelled the attack using a slingshot, the bureau said. One sailor suffered a minor injuries during the assault.

Friday’s attack is the latest as acts of piracy increase in the Gulf of Guinea, especially along Nigeria’s 530 miles of coastline. Thousands of militants who for three years waged an oil war in the Niger Delta have been getting restless following months of delays in their post-amnesty retraining exercise.

Some have complained of poor reward after they surrendered arms, warning that they might return to the creeks to fight if the situation continued.

Around 20,000 former militants who were fighting for a fairer share of oil revenues to go to local communities, laid down their arms under an amnesty deal in the oil-rich region between August and October last year.

Under the deal, the government promised to provide cash, amenities in the region, jobs and retrain the ex-combatants.

Violence by armed rebels in the region between 2006 to 2009 played havoc with oil output, which dropped in this OPEC member state to around a million barrels per day as against 2.6 million barrels at peak production level.

Hundreds of people, both locals and foreigners, most but not all of them linked to the oil sector, have been kidnapped in the Niger Delta in recent years.

Most have been released after a few days or a few weeks in captivity, very often after the payment of a ransom.