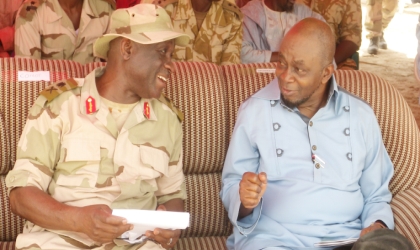 The Managing Director of the Niger Delta Development Commission (NDDC), Mr. Chibuzor Ugwuoha, was yesterday reprimanded by the Rivers State Governor, Rt. Hon. Chibuike Rotimi Amaechi for contravening traffic offence in Port Harcourt, by allowing his convoy to drive one-way against the traffic while seated in his car.

The NDDC boss’ convoy, made up of a pilot car with mobile policemen and three other vehicles, had jumped from their lane into the opposite lane heading towards the Governor’s car, unknown to them that Gov. Amaechi was driving himself, leading his convoy while on an unscheduled inspection of projects.

On citing the convoy which was beating traffic, Governor Amaechi blocked the offending convoy, and ordered them to reverse and join the traffic properly, expressing surprise that the NDDC boss would allow the convoy in which he was travelling to drive against traffic.

The governor, who was not happy over the incident, said the NDDC boss as a public figure  should live by example and not to flout laws.

Governor Amaechi personally ensured that the convoy of the NDDC boss reversed and drove back to the exact point along the road where the convoy had violated traffic, while the former continued on his inspection tour.

“If I can stay on the queue and obey traffic why can’t he do the same, it is his duty to be law-abiding at all times”, Governor Amaechi contended.