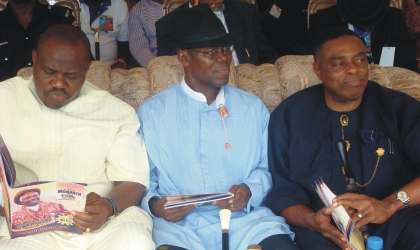 The Federal Government has concluded arrangements to commence the training of more than 20,000 ex-militants in the Niger Delta tomororow under its post-amnesty programme.

The Special Adviser to the President on the Post-Amnesty Programme, Mr Timi Alaibe,  announcement this in Lagos last Friday while receiving the 26-member team of trainers from the United States.

He said the ex-militants would be trained in batches of 2,000 each.

“I am happy to say that there is light at the end of the tunnel for the Niger Delta ex-militants and Nigeria as a whole.

“The trainers are qualified hands from different faculties, because we are aware of the problems that people of the Niger Delta had gone through over the years.

“The arrival of the team will mark the rehabilitation and integration of the ex-militants. They will undergo various training programmes that will change their former ways of life,” Alaibe said.

He said the programme would resolve the problems of unemployment and poverty among the ex-militants.

The Tide On Sunday source said the trainers arrived at the Murtala Muhammed International Airport, Lagos, aboard Delta airline.

The source said that the team, led by Dr Bernard Lafayette, came from the Centre for Non-Violence and Peace Studies, University of Rhodes Island, U.S.A..

Lafayette commended the government for its commitment to the post-amnesty programme, and described the trainers as the best of experts for the ex-militants.

Mr Allen Onyema, Chairman, Foundation for Ethnic Harmony in Nigeria (FEHN), the NGO that facilitated the programme, also commended the government for its commitment to the exercise.

He declared: “The Federal Government believes that there are various ways to fight for liberation and not only through violence.

“Government has discovered that weapons of war will do harm to Nigeria, and that was why it came up with the training programme, through which we have been able to transform the lives of so many Nigerians in the past.

“Since the amnesty programme was inaugurated, the international community has been very supportive.

“The programme will liberate Nigerian youths from the shackles of violence that had been witnessed in the past.”