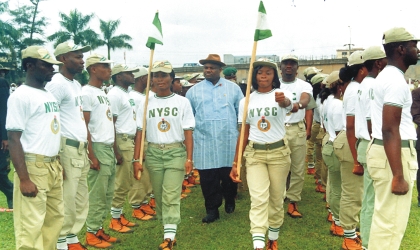 The relative peace which the upper and the lower chambers of the National Assembly had enjoyed so far over the Constitution Amendment assignment is already being threatened as the leadership of the senate, yesterday, accused the Speaker of the House of Representatives of mischief  as he called for withdrawal of the copies of the amended constitution already transmitted to the state Assemblies.

Speaker Bankole Dimeji  had accused the leadership of the Senate of transmitting a doctored version  (which he called the Senate version)of the document instead of the harmonized version as agreed upon by both chambers.

Consequently, he has directed Clerk to the National Assembly, Alhaji Salisu Abubakar Maikasuwa to withdraw the amendments transmitted to the states Houses of Assembly  and replace with the ‘genuine’ harmonised version.

In a handover ceremony held on June 15th in Abuja, President of the Senate and Chairman of the National assembly, Senator   David Mark had handed over the said harmonized version of amended constitution to   the Chairman of the Speakers Conference of Nigeria, Mr. Istifanus Gbana.

Reacting to the Speakers  order, Mark described the decision of the House leadership as mischievous and unacceptable.

His words: “There is no need for anyone to go to the media asking the CNA to withdraw what was sent to the Houses of Assembly. Anyone going about saying that they should withdraw the documents is certainly wrong and nothing will be withdrawn. This is the height of mischief.

“It is wrong to go to the media to say that the version transmitted to the states is the Senate version.”

For clarity, Senator Mark said,  the National Assembly transmitted all the three documents including the Senate, House and the harmonised version .

Expressing disappointment over the House leadership’s decision, Mark added, “The more mature way to go about this is to have gone through the Deputy Senate President who is chairman of the constitution amendment process in the National Assembly.”

Deputy Senate President and Chairman of the Senate Committee on Constitutional Review, Senator  Ike Ekweremadu coming under Order 43 of the Senate Standing Rules, denied claim by the House that the Senate sent a doctored version of the Constitution amendment to the Houses of Assembly.

His words “I want to assure my colleagues and Nigerians that what was sent to the Houses of Assembly was essentially the harmonised version of the Constitution amendment. If there is any confusion at any point, I believe it must be deliberate and meant to frustrate the exercise.

“And I believe the problem must be either from the state assembly clerk or from the printers. I congratulate the Kogi State House of Assembly for becoming the first state to pass the harmonised Constitution amendment.”

”Our attention has been drawn to a news story making the rounds that the constitutional alteration bill sent to the state Houses of Assembly is not the harmonised version.

“This cannot be true because the three documents the secretariat was asked to transmit to the various houses are as follows- 1. A copy of the harmonised version; 2. A table showing the two versions passed by the Senate and House of Representatives respectively, and 3. A copy of the report of the conference (harmonisation) committee of both chambers. We are therefore at a loss where the mix up, if any, would have arisen from,Senator Eze said.