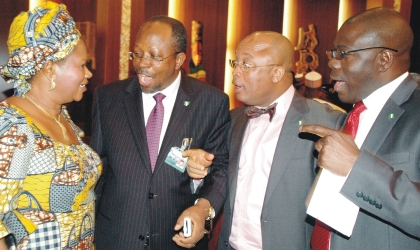 The Rivers State Government says it is ready to partner with the United Nations Office for Project Services (UNOPS) in its efforts at actualising the vision leading to the establishment of the Greater Port Harcourt City Development project.

Represented by his deputy, Engr. Tele Ikuru, Governor Amaechi described the Greater Port Harcourt City Development project as “the brainchild of this administration” and “a well thought-out project, borne out of the vision of building new capital city with workable infrastructure in place just like any modern city in any part of the world.

Noting that the project was established by law to ensure its sustainability, the State Chief Executive explained that the project had gone through its first phase, pointing out that N50 billion had been committed to the project on an annual basis.

Earlier, Mr. Alidu Wirba had explained that UNOPS was exploring the possibility of contributing towards the actualisation of the Greater Port Harcourt City Development project, and that UNOPS was poised to give the needed support to make the project a reality.

According to him, the UNOPS mandate covers Human Resources Management, Procurement and Project Management, adding that the body had offices in all UN member countries, with its Nigerian offices based in Abuja and Port Harcourt.

In her speech, Sole Administrator of the Greater Port Harcourt Development Authority (GPCDA), Dame Aleruchi Cookey-Gam had said that the interaction between her agency and UNOPS had been fruitful so far, observing that the need to interface with government as a way of ensuring greater results necessitated the courtesy visit on the State Government.