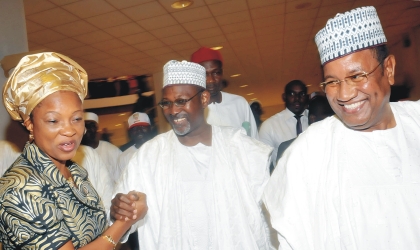 Two kidnap suspects died on Wednesday in Uburu, Ohaozara council area of Ebonyi, during a bid to rescue their victims by soldiers of the 82 Division of the Nigerian Army, Enugu.

The four-man gang had engaged the soldiers in a gun exchange, but two of them died while being conveyed to Enugu, the division’s General Officer Commanding (GOC), Maj.-Gen. Mohammed Isah, said.

Parading one of the suspects, Chijoke Onu, in Enugu, Isah told newsmen that the gangsters had abducted Princewill Ilo and Okwi Emejulu from their residences in Enugu on Tuesday.

Ilo, it was learnt, is a relation of the Secretary to the Enugu State Government.

However, Onu, an auto panel beater, said that he was innocent of the allegation.

According to him, he was arrested by the police on his way to a nearby community to repair a broken down vehicle.

But the GOC said his men trailed the gang to Uburu, where they held their captives hostage.

“When we received information about the suspects, I authorised the operation. There was a heavy exchange of fire when my men stormed the scene where they kept their victims.

“The suspects were four in number. We arrested them, but unfortunately two of them bled to death on our way back to Enugu and another who sustained injuries has been receiving treatment at the Military Hospital.

“We succeeded in rescuing the victims unhurt and they are in our custody now,” he said.

According to Isah, three AK47 rifles, 51 magazines, one pump action rifle and 730 unexpended 7.62mm special bullets were recovered from the suspects’ hideout.

Reports indicate that the suspects were said to have demanded N15 million as ransom before the soldiers took them by surprise.

Meanwhile, the GOC announced that the division apprehended two gun runners at Ariaria Market, Aba, Abia, with about 100,000 firearms and munitions.

He said investigation into the matter was ongoing and expressed the hope that more arrests would be made.

Isah said the army was poised to check the upsurge in crime wave in the South-East and South-South geo-political zones, and called on parents to watch the company which their children and wards kept.