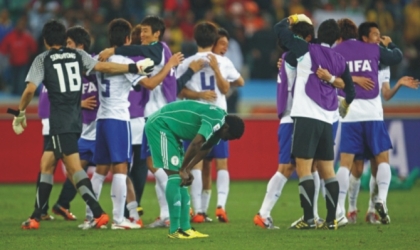 Super Eagles, Obafemi Martins bows in grief as South Korea celebrate , yesterday after their 2-2 draw in Group B

It is a scenario that many Nigerians thought would happen at the 2010 World Cup in South Africa, the very first time Africa is hosting the mundial, that the Super Eagles would fail to fly beyond the first round.

But nobody wanted to believe it.

Last night in Durban, the Nigerian team failed to beat South Korea and crashed out of the World Cup with barely a whimper, after playing out a 2-2 draw in the must win match.

Thus, the Super Eagles left the mundial, almost the same way it left it last time out in Korea/Japan 2002 without a victory and with only one point.

Ironically, the Eagles had promised to lay down their lives to beat the Koreans for their distraught colleague, Sani Kaita, whose infamy led to the collapse against Greece in their second match. They begged Argentina to defeat Greece to give them the opportunity to work for group B’s second ticket for the round of 16.

Unfortunately, Diego Maradona’s team defeated the Greeks 1-0 but the Eagles failed to fulfill their own part of the  bargain.

Interestly, Nigeria looked to be on the way when Kalu Uche pounced  on a pull out  to score the first goal ahead midway in the first half.

With Nwankwo Kanu, Kalu Uche and effervescent Ogbuke Obasi pulling strings, there was the false hope that the Eagles were on their way to victory.

It was however, not to be as lightening struck the Eagles twice at the mundial. Just like in the  infamous match with Greece, South Korea exploited two dead ball situations to equalize and shoot ahead either side of the two halves, though there was no Sani Kaita madness; to blame this time.

Though Yakubu Aiyegbeni was able to convert a penalty to draw Eagles level, he was guilty  of missing an open goal opportunity, almost by the goal line, which probably ranks tops in the history of goal misses” of the World Cup.

As Nigerians late rally failed to produce a goal, the draw and a point proved grossly inadequate to keep the them in the tournament, while it was enough for the Koreans to celebrate second round qualification , and the benefit of Argentina’s third victory in as many matches.