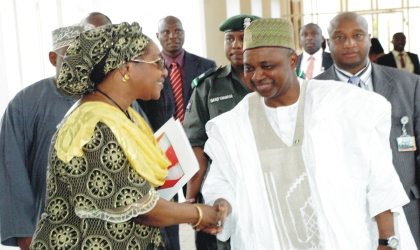 Vice President Namadi Sambo (right) in a handshake with Chairman, Economic and Financial Crimes Commission (EFCC), Mrs Farida Waziri after a meeting at the Presidential Villa in Abuja, yesterday.

Despite its recent expansion and provision of necessary equipment, the Braithwaite Memorial Specialist Hospitals (BMSH) owned and operated by the Rivers State Government is still undergoing serious pressure from patients, with about 7,000 visitations monthly.

Chief Medical Director (CMD) of the hospital, Dr Bernard Aprioku told The Tide, yesterday that the location of the  medical facility was posing great challenge.

He observed that currently, the facility is the only tertiary medical institution in the city centre hence the swelling patient population.

He added,” frankly receiving about 7,000 patients a month is a pressure. At that rate, we are seeing 12 times what we used to see before if you project for one year”.

Following strike embarked upon by resident doctors yesterday, Dr Aprioku declared that the hospital would have no option but to resort to skeletal services.

The CMD said consultant doctors have been mobilised to oversee essential services, in order to reduce emergency cases in the hospital.

When The Tide visited the hospital some stranded patients were seen loitering around in the hope that doctors would appear to assist them.

But the doctors never turned up following the outcome of a consultative meeting, The Tide learnt.

Investigations by The Tide further revealed that the labour action affected the emergency ward and other  ancillary activities in the institution, while administrative and senior medical consultants were still carrying out skeletal services.

However, Chief Medical Director of the hospital, Dr Bernard Aprioku confirmed the incident but said management was doing all it could to reduce its impact on patients.

His words; “ We are not on strike but only some section, the resident doctors are . We  are trying to see how we can run skeletal services,

The bone of contention, The Tide learnt, stems from disagreement arising from the doctors demand for a consolidated medical salary scale (CONMESS)

The strike it was further gathered was a fall out of nationwide meeting of resident doctors held recently.

Unfortunately, Dr Aprioku stated that though a warning strike had been embarked upon by the doctors, “we just received the letter yesterday about this strike”.

The CMD assured that management would ensure that patients are taken care of , “for now we have been able to mobilise our consultants doctors to provide essential services”.

Nonetheless, Dr Aprioku observed that not all cases would be taken care of, “there are certain risks we can’t take for now.