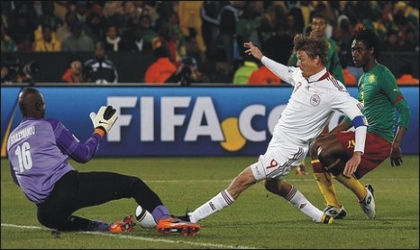 President Goodluck Jonathan has expressed his commitment to the development of the Niger Delta region, saying the master plan to fast-track development in the region is underway.

The president, who spoke at a civic reception at Asaba, yesterday, as part of his one-day official visit and commissioning of projects in Delta state, said that the Nigeria Naval Logistics Command at Oghara, is strategic to the greater achievement of the master-plan.

He explained that the Presidency has devised new strategies in sustaining the prevailing peace in the region by meeting regularly with governors in the region.

“I now hold a monthly meeting with governors in the region to ensure that the amnesty and post-amnesty programme is achieved with an aim to stop militancy”.

At Oghara, Ethiope west Local Government area, Pressident Goodluck Jonathan charged the military to focus more on area that would make them useful to the civil society in time of peace than spend all their time on management and operation of arms and ammunitions.

He gave the advice at Oghara when he commissioned the Nigeria Navy Logistic command build aand donated by delta state government to the Nigeria navy.

He said the federal government is considering areas were the military can be useful to the civil society by engaging in programmes such as construction as it is been done in other countries of the world.

President Jonathan commended the foresight of the initiator of the project which he said would enhance the operations of the Nigeria navy.

The president who was on a one day working visit to Delta state applauded governor Uduaghan and the people of Delta state for the laudable project, he however enjoined the navy to make a Judicious use of the facility while calling for adequate maintenance.

According to him, “we have seen a situation where other state come to the federal government to demand for a refund of whatever maintenance they have carried out on any federal project but in this case this facility is built from the scratch on a virgin land with nobody coming to the federal government to demand for refund this kind of gesture is highly commendable”.

The Chief of Naval Staff Vice Admiral Ishaya Ibrahim who could not hide his joy commended the delta state government for its kind gesture building the logistic command for the navy.

The Vice president also commissioned the ultra Modern Delta state University Teaching Hospital at Oghara, he expressed delight at the level of infrastructure in the institution saying it is higher than all he have seen in other parts of the country.

In his address, Governor Emmanuel Uduaghan of Delta state expressed Joy that these projects have come to fruition even as he thank President Jonathan for finding time to come to the state and commission the projects.

He said the state government will continue to deliver on its dividends of democracy to the people of the state. He also assures the federal government that the state will stand out among other for infrastructural development.

Tight Rope Named Hope …After Throwing ‘Kaita’ In The Works