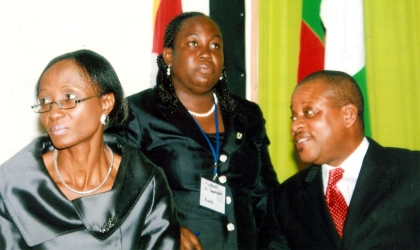 Four Andoni militants standing trial before a High Court in Port Harcourt were yesterday set free by the federal government under the presidential amnesty programme.

Those affected are George Adumu, Wellborn Isiah, Loveday Samuel and Luke Loveday. The former militants gained their freedom following a letter from the Attorney-General and Minister of Justice, Mohammed Bellow Adoke (SAN) dated May 28 and addressed to the Attorney-General and Commissioner For  Justice, Rivers State. But for the intervention, the presiding judge, Justice Boma Diepiri would have ruled on the matter, yesterday.

The letter was read in court and made available to the press by the counsel representing Adumu and others, Alhaji Aremu Oso (SAN).

Alhaji Oso argued that based on the letter, the suspects should be set free since the federal government over ruled the matter.

He told reporters that, “ the stage we are in now, whether they like it , it is the federal might that must be respected because they granted the amnesty”

Also part of the letter from the AGF read, “ I wish to draw your attention  to the above matter and to seek your kind review of the cases involving the accused persons since the offences for which they are being prosecuted were allegedly committed in 2008, which falls within the period covered by the presidential amnesty proclamation”.

The AGF through the letter argued that the Special Adviser to Mr President on Niger Delta also confirmed that the suspects were among documented persons who accepted the presidential amnesty on 14th and 15th August 2009.

Though Justice Diepiri adjourned the matter for mention on June 22nd, he had earlier stressed the need for the court to be duly informed of the latest development before any action would be taken.

Adumu and others were arrested and detained since December 2009 in  suit PHC/337/2010 for alleged conspiracy, murder and illegal possession of fire arms.

State counsel, Emmanuel Aguma had at the last learning argued that Adumu and others do not fall under the amnesty blanket as most of the crimes they committed were against innocent individuals, hence they should be tried and punished.

The suspects were accused of murdering one Sam Isoto Joseph at Asarama. They were also arrested with fire arms on April 17 at Oyorokoto fishing port in Rivers State.

They were also charged for over 15 offences, including the kidnap of one Obadiah Ernest and for providing false information to the Joint Taskforce in 2008.