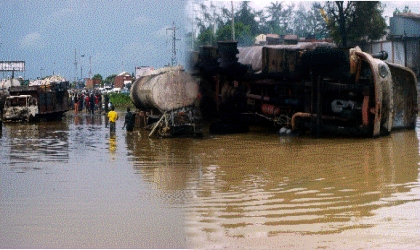 Eye witnesses told The Tide that the accident occurred when one of the tankers in an attempt to negotiate through the  bad part of the road, veered off, spilling its contents, before bursting into flames.

According to the account, petrol from one of the tankers  helped to ignite the other trucks involved in the accident.

Among the dead were the tanker driver whose body was immediately recovered and the conductor who was lying lifeless in the water when our reporter visited the scene at about 2.00pm, yesterday.

However, when contacted, the state Police Public Relations Officer (PPRO), Dr Rita Inoma-Abbey confirmed the incident but declined to comment on the exact casualty figure.

Meanwhile, residents of the area have blamed the incident on negligence by the government which failed to make the road safe for motorists.

One of the residents, Mr Joseph Ejiofor described the incident as devastating.

“We are all surprised coming here to see this situation. The government should come and rescue people from here, make drainage , channel the water. It is not a big deal, it is something they can do”, he said

Another resident, Mr Eze urged the government to channel the water into  Imo river.

‘Government should make this place motorable in January, FERMA came here they did what they did and left”, he said.

The Tide learnt that because of the heavy traffic caused by the incident, vehicles coming from Abia State to Port Harcourt had to go through Igbo Etche.

Meanwhile, the Rivers State Government has awarded the contract for the repairs of the failing spots along the Port Harcourt-Aba Expressway within the Oyigbo axis

State Commissioner for Energy and Natural Resources, Dr Dawari George made this known to newsmen, while inspecting the remains of petrol tankers that collided with a commercial bus leaving two people dead at the spot, yesterday.

Dr George while expressing sadness over the accident, said measures are being put in place to avert such incidents in the future. He added that government was concerned about the welfare of its citizens.