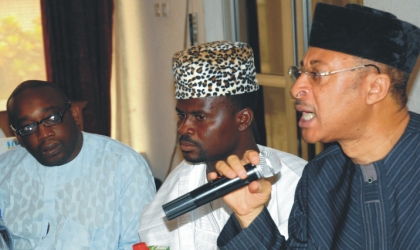 L-R: Son of Late M.K.O Abiola, Jamiu Abiola, Co-ordinator of Action Group of Nigeria, Mr Olawale Okuniyi, and Prof. Pat Utomi at the stakeholders' Colloquium in commemoration of the 17th anniversary of June-12, 1993 in Lagos,last Saturday.

A mid-day fire out break yesterday gutted parts of the official residence of the Speaker of the Rivers State House of Assembly, Rt Hon Tonye Harry along Forces Avenue, old GRA, Port Harcourt.    A source, close to the family attributed the cause of the fire to a possible electrical fault emanating from one of the rooms in the building.

The inferno which affected the living room, lobby and two rooms destroyed properties valued at millions of naira, although no life was lost in the incident.

However, The Tide gathered that the Speaker, Rt Hon Tonye Harry was not around when the incident occurred but the quick intervention of the state fire service and the men of the Nigeria Police Force, Old GRA Division who arrived the venue of the incident on time saved the situation from escalating.

Speaking to newsmen after monitoring the incident, the Director of Press,  State House of Assembly, Mr Tams Dede described the incident as unfortunate and thanked the Almighty God for protecting  lives of occupants of the house while the fire lasted.

Mr Dede further commended the state fire service, the Old GRA Police division and sympathisers who assisted in putting off the fire.

The commissioner for Special Duties, Chief Davies Ibiam Ikanya disclosed this in an interview with regional editors of Scroll Magazine in his office in Port Harcourt.

Chief Ikanya also said that the government had awarded contracts for the construction of four fire service stations at Degema, Borokiri, Ahoada and Rumuodumanya.

He said that the ministry of Special Duties would soon take charge of the affairs of the ministry of Niger Delta at the state level and stressed the need for a comprehensive development plan for emergency arrangement and operations in the country.

Chief Ikanya who thanked the editors for choosing the state for their seminar titled “Dividends of Democracy, the Role of the Press and the Police’, also stressed the need for collaboration between the ministry and the media to sensitise the public on the need for massive investment in the fire and emergency sectors of the economy.

He further thanked them for coming to the state to assess the various projects embarked upon by the Governor Amaechi-led government in the state and stressed the need for constructive criticisms by media organisations in the country.

Victory Over Greece, S’Korea, A Must For Nigeria –FIFA