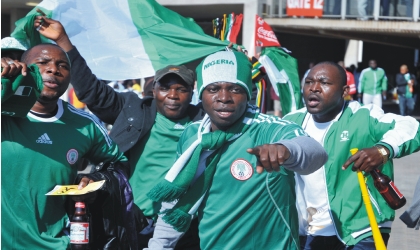 Nigerians in South Africa cheering the Super Eagles, during their 2010 FIFA World Cup Group B match against Argentina, last Saturday.

Displaced traders of Rumuwoji (Mile 1) Market in Port Harcourt have faulted the method adopted by the committee set up by the Rivers State Government to allocate the 1000 stalls already completed under the first phase of the market’s reconstruction.

Speaking to The Tide, factional chairman of Mile 1 Market Traders’ Association, Chief Young Georgewill, said while the traders are not opposed to the non-refundable N10,000 application fee required by the committee, they feel the bidding process should not have been thrown open to all public until the 650 displaced traders were allocated their new stalls.

“Paying the N10,000 is not the issue, but we feel that since we were displaced to enable government rebuild the market, we think that they (government) should have considered us first before making the remaining 350 stalls open to the public,” he said.

According to Georgewill, inviting the public to bid means that some genuine traders may lose their stalls for which they have been paying rent to the government.

He was, however, optimistic that the state governor, Rt. Hon. Chibuike Amaechi, would intervene on behalf of the already distressed traders by ensuring that justice prevails.

“We feel that government already has records of the 650 displaced traders and should have contacted them to allocate their stalls to them before making the allocation public.”

“However, we are also certain that our governor is not unaware of the true position of things. So, we believe the right things will be done,” he said.

According to him, the members are yet to understand the method government wants to adopt in the allocation of new stalls at the model market.

He, however, assured that his council will soon meet to deliberate on the issue.

Meanwhile, some of the affected traders did not hide their fears and disappointment at the government’s decision.

“When government asked us to temporarily move to Ojukwu Field and Cultural Centre to enable them construct the model market, we readily complied because we though that it will benefit us, but now we cannot understand the government.”

“Please, Governor Amaechi help us and our children”, they lamented. A cloth seller at the market, Mrs Florence Owem, said the new decision by government to make the allocation an all-comers affair portends danger to the traders who are already in possession of allocation papers of the old Mile I market stalls.

According to her, one of the Allocation Committee members and a serving commissioner in the state, Barr Osima Ginah, had initially advised traders with such original allocation papers to keep them intact as government will give these traders preference in any stall allocation exercise.

Owem wondered how old women like herself, especially those who sell vegetable, periwinkle and other petty commodities would be expected to raise as much as N10,000 for a mere application form that does not guarantee allocation.

It would be recalled that the Rumuwoji Market Allocation Committee set up by the Rivers State Government on Wednesday placed a newspaper notice calling for interested members of the public to obtain application forms with a non-refundable sum of N10,000 for the allocation of stalls at the new model Mile 1 market.

Victory Over Greece, S’Korea, A Must For Nigeria –FIFA